Building on the success of its recent NASCAR campaign on Twitter, and ahead of becoming an official 2018 Winter Olympics sponsor, Toyota USA (‎@Toyota) created the ‎#LetsJoinHands campaign to celebrate the 2016 Rio Olympics. ‎@Toyota shared its campaign video on Twitter, then asked people to post a photo or video of themselves joining hands. For each user-generated post it donated $20 to ‎@UnitedWay, which increased awareness of the campaign while also doing good.

Twitter’s First View and conversational video ad products helped ‎@Toyota achieve its goals for the ‎#LetsJoinHands campaign. First View enabled broad awareness of the campaign while conversational videos encouraged people to generate content that ‎@Toyota then curated and promoted. By connecting the ‎#LetsJoinHands conversation with a sizeable charity donation to ‎@UnitedWay, ‎@Toyota furthered campaign awareness and positive user engagement. ‎@Toyota also hosted an out-of-home (OOH) experience, which enabled people in New York and LA to join hands remotely. The videos were then posted to Twitter.

Make it a conversation.

Through the use of conversational video ads, ‎@Toyota made the campaign a two-way conversation. 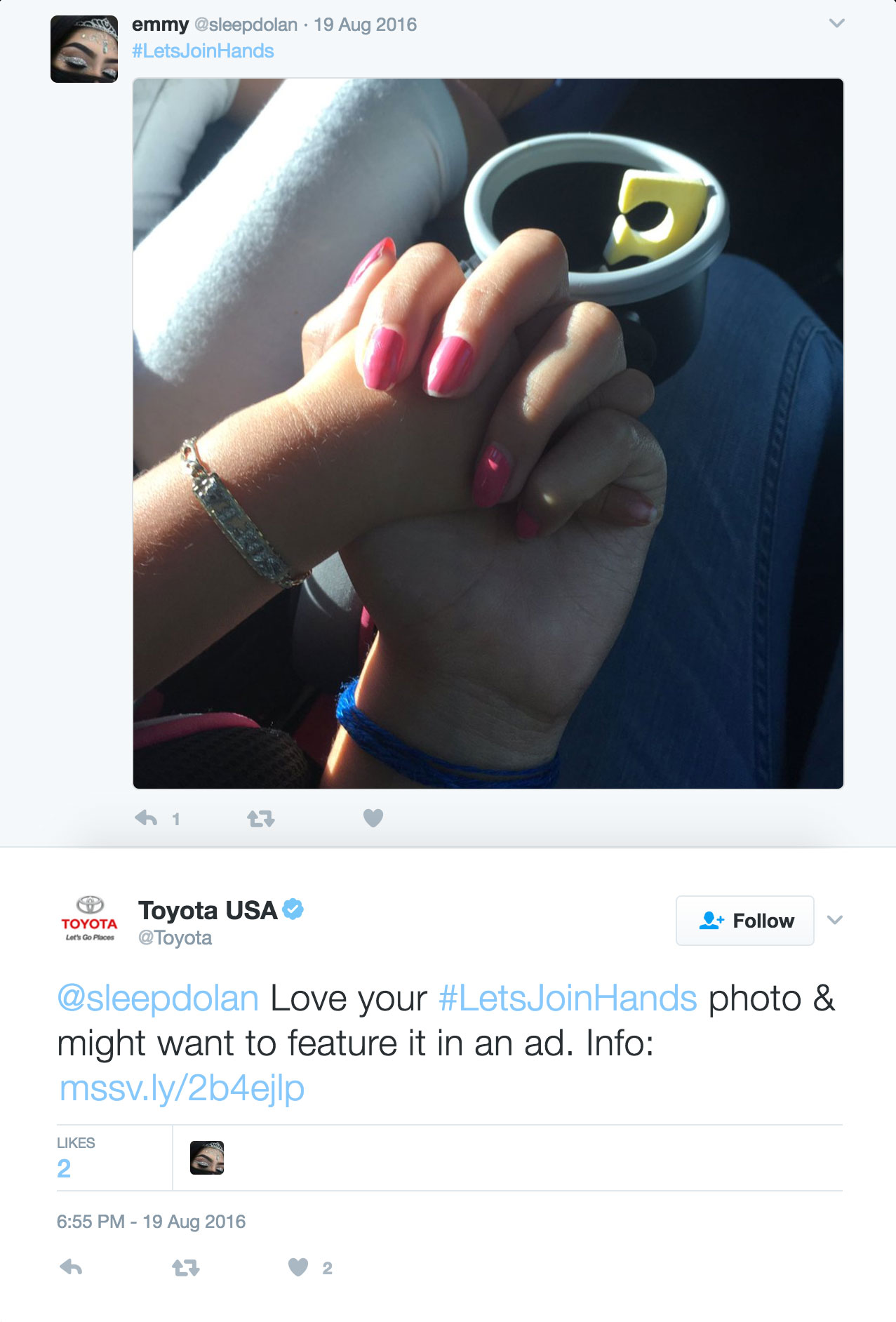 ‎@Toyota created strong brand association with the campaign by curating and promoting this user-generated content.

‎@Toyota made sure to thank all contributors for its contribution, creating significant positive sentiment for the campaign.

‎@Toyota’s ‎#LetsJoinHands campaign was a winner on many levels, beating other advertisers and the company’s own internal campaign goals. The campaign won the USA Today Rio Olympics ad bracket, and was also the second-most-mentioned Olympic Twitter campaign hashtag, following only ‎@CocaCola’s ‎#ThatsGold, even though Toyota was not an official Olympics sponsor. Finally, the campaign demonstrated that engaging users is more effective than exposure alone, as ‎@Toyota realized 1.5X higher positive sentiment than auto campaign averages.