Tens of millions of people log on every month to do battle on Epic Games’ Fortnite: Battle Royale. Dropped into a post-apocalyptic landscape, players must scavenge for resources while fending off attacks.

Every 10 weeks, Epic Games (‎@EpicGames) delivers a new season of weapons, maps, and storylines, each one ending with a “live event” that dramatically alters the nature of the game.

When it was time to launch an entirely new version of Fortnite (‎@FortniteGame) last fall, Epic knew it had to do something big to keep fans engaged during the downtime required to make the switch. It also knew that gaming is one of the most popular topics on Twitter, and brands that met their internal KPIs were 2.3X more likely to have included Twitter in their launch plans than brands that didn’t.1 So it turned to Twitter to help generate buzz and build awareness for Chapter 2.

Gaming inspires more than a billion Tweets each year. Gamers come to Twitter for news about their favorite titles, as well as upcoming announcements. It was the perfect venue for Epic to make a dramatic statement.

That statement was silence.

As season 10 drew to a close, Epic took the game completely offline. Players who logged on saw nothing but a black hole in space. When people came to Epic’s Twitter account to find out what had happened, they were treated to a live stream of the black hole. Epic’s Tweet history was gone. The worlds it had created were gone. No one outside Epic knew if Fortnite would ever return.

So, for the next 36 hours, the Fortnite faithful filled the void with millions of Tweets bemoaning the loss of the game and speculating about the future:

On October 12 at 11am PST, Fortnite teased the end of its current season just 24 hours before an in-game event. 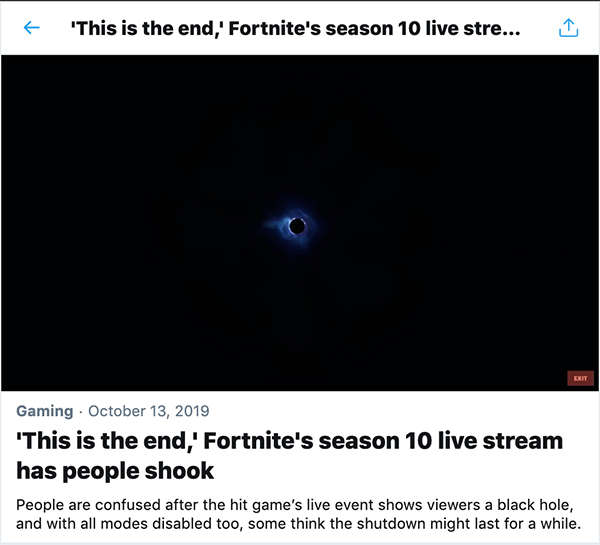 The next day, Epic took Fortnite offline, collapsing the entire world into a black hole. For the next 36 hours, it live-streamed the black hole on Twitter, leaving fans to speculate about what would happen next.

Return with a splash.

Epic followed up by Tweeting bonus content around Chapter 2, encouraging fans to uncover hints about the new game from additional videos.

Nearly 13 million people watched more than 50 million minutes of the 36-hour Twitter live stream, making it the most viewed gaming live stream ever on Twitter. It became the number one trending topic on Twitter worldwide, and inspired widespread coverage in both gaming and mainstream media outlets. Within days, Epic Games’ Fortnite account had added another half a million followers.

Fortnite: Battle Royale Chapter 2 was one of the most extraordinary launches of any kind. It’s more proof that launching on Twitter can pay off for brands that are willing to push the envelope and take risks.

The Conversation: Sports are back