Be sure to win big on award show season’s grand finale by starting with the audience on Twitter, who are uniquely receptive to your brand messaging before, during, and after the big ceremony.

From the time the nominations are announced until several days after the ceremony, Twitter can’t stop talking about the Oscars. In fact, more than half (58%) of people on Twitter watch or follow the Academy Awards.1

What do this receptivity and engagement mean for marketers? They represent an opportunity to get in front of one of the most influential audiences. Two-thirds of Twitter’s audience influence purchases of friends and family3, and they’re 31% more likely to be the first to buy new products than the general population.4

There are two main Twitter audiences watching the big show.

People who are obsessed with the award show itself come to Twitter for a range of reasons: 53% congratulate nominees and winners, 40% share Oscar facts, and 5% debate nominations.

Awards enthusiasts were particularly happy about the nominees/winners during last year’s Oscars as they believed the titles and cast members deserved their wins. 70% of their Tweets showed emotions like joy, and 👏🏆🙌 were the most-used emojis.

Pro tip: Target relevant emojis in your campaigns to reach the most tuned-in, real-time audience. Similarly, optimize performance during the show by incorporating trending emojis into the keywords.

The fashion conversation spikes during the Oscars. Here are the most talked-about topics:

When do people on Twitter discuss the big show? 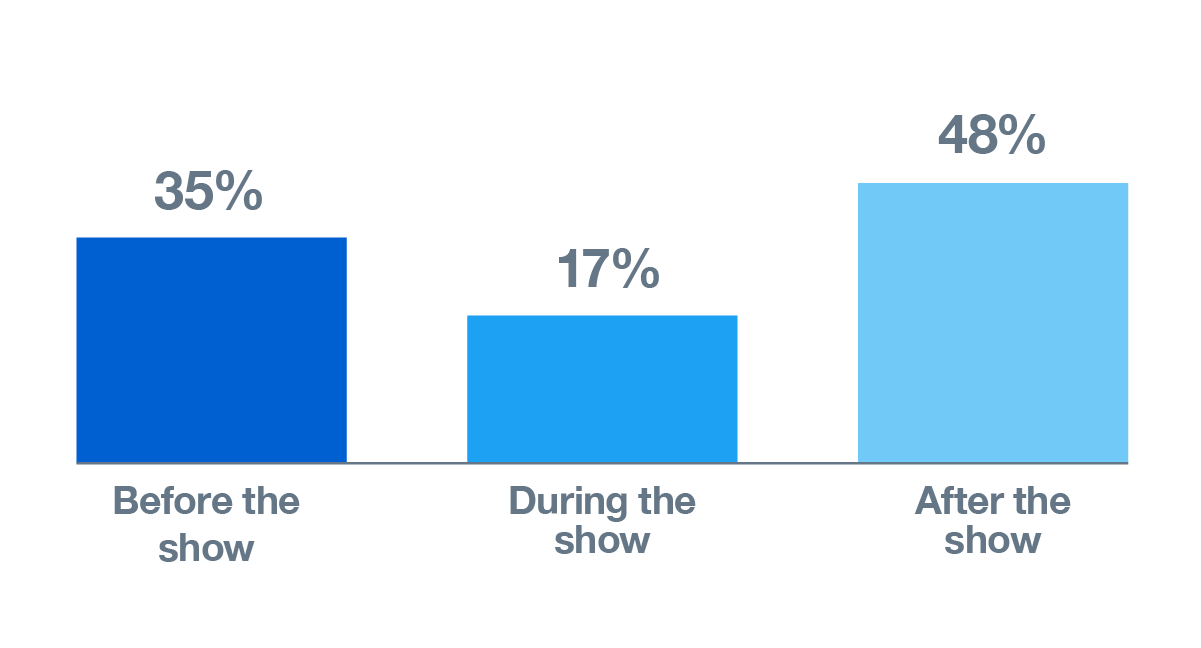 Unlike the Golden Globes, where much of the conversation happened during the show, 83% of the Oscars conversation on Twitter happens before and after the show.

Pro tip: Take advantage of consumer interest in the Oscars before and after the event to see more efficient ad performance.

Before the big show, Twitter heats up on nomination day, with a 22X increase in Oscars conversation on ‎#OscarsNoms day compared to the past seven days’ average. In addition to discussing nominees and what will happen during the show, people come to Twitter to discover tips for hosting watch parties. 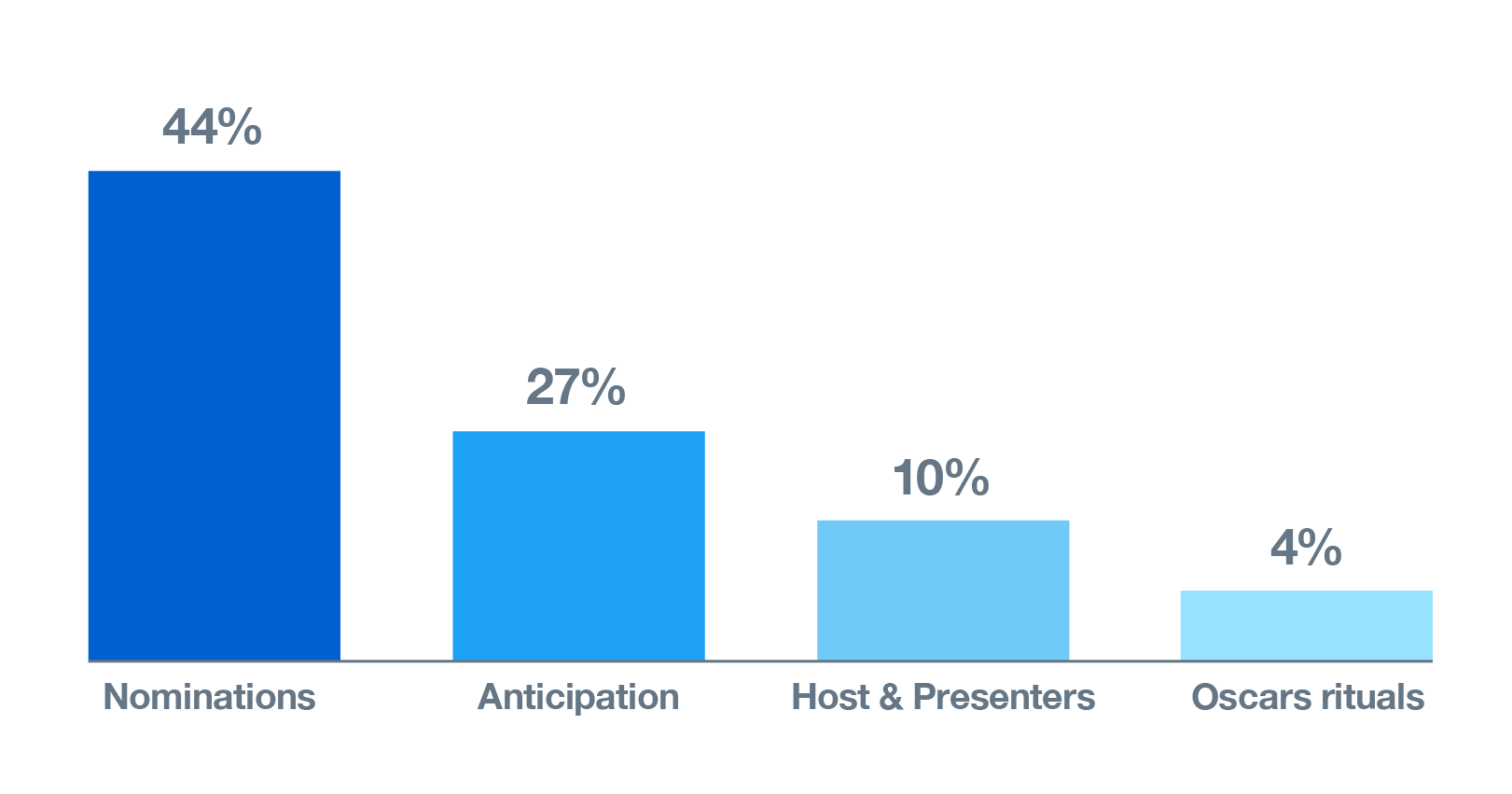 Oscar parties remain a hugely popular tradition, and party hosts turn to Twitter for advice on throwing a satisfying get-together. 44% of Tweets around throwing an Oscar party were about party prep, 11% discuss ideas for party themes or decor, and 8% seek or share recipes for food and cocktails.

🏅 “Gold” and “golden” were the most talked about party themes in 2018. People were interested in gold party linen, balloons, coasters, and gold-dusted donuts.

🍸 Cocktail recipes, specifically different versions of margaritas, were the most discussed.

🥐 For appetizers, puff pastries were mentioned most often.

Pro tip: Use the days leading up to the awards to inspire party hosts that DIY. Use short-form video (less than 6 seconds) to bring your audience quick how-to guides, recipes, and tips.

There was also a 63% spike in Tweets around where to watch the show on Oscar Sunday, starting at 3pm.

As the Oscars kicked off, people were turning to Twitter to discuss events in real time:

The conversation around Oscars winners on Twitter continued after the show, and social issues became a hot topic.

Oscars fever continued for several days after the show aired on TV, with people on Twitter seeking information about how to find and stream the winning titles. And once the show was over, Twitter’s meme game took off, with more than 11,000 Tweets of memes, GIFs, and audience reactions from the awards.

As the red carpet rolls out and the golden statues are given their final polish, millions of people eagerly await Hollywood’s biggest night. Even though this massive event takes place on TV, Twitter should be an essential part of any marketer’s plan.

There’s strong evidence that the most successful campaigns can begin several days before the ceremony and continue several days after. Why? Because people are obsessed with the Oscars throughout award show season. As the ‎‎#RoadToTheOscars heats up after the Golden Globes, people come to Twitter to congratulate (or critique) nominees, share which movies they’ve seen, and seek ideas for Oscar parties. And as the Oscars wind down, people seek information and where to watch the winning films and share reactions to the ceremony with GIFs and memes. This presents a window of opportunity to tap into this highly engaged and influential audience. Your brand deserves an award-worthy performance, and our audience can help you get there.

Data source: Crimson Hexagon. Data is pulled from Jan 1, 2018 to Mar 12, 2018. All data is from public Twitter and Instagram public profiles and does not include private accounts. Analysis is based on English language Tweets in USA.

Are you ready for the return of sports?