Television is happening, and it’s happening on Twitter. But how does Twitter help marketers extend their TV campaign to reach more of their target audience?

In a series of new studies commissioned with Nielsen, we found that Twitter provided an average of 6% incremental audience reach to TV across four measured cross-platform campaigns. If you’re a marketer, these three key findings will help you connect with more of your target audience on Twitter.

In one study, a large CPG brand ran a campaign during a major global sports event that included a Twitter First View Promoted Video ad. The brand saw 22% incremental reach with its target audience on Twitter versus advertising on TV alone. By taking advantage of consumer interest and activity around sports and combining that with the increase in unique impressions from using First View, the campaign was able to achieve this large jump in reach.

Expanding your brand’s reach isn’t limited to major events or First View, though. Overall, we found that Twitter provided an average of 6% incremental reach to television among the campaign target demographics. 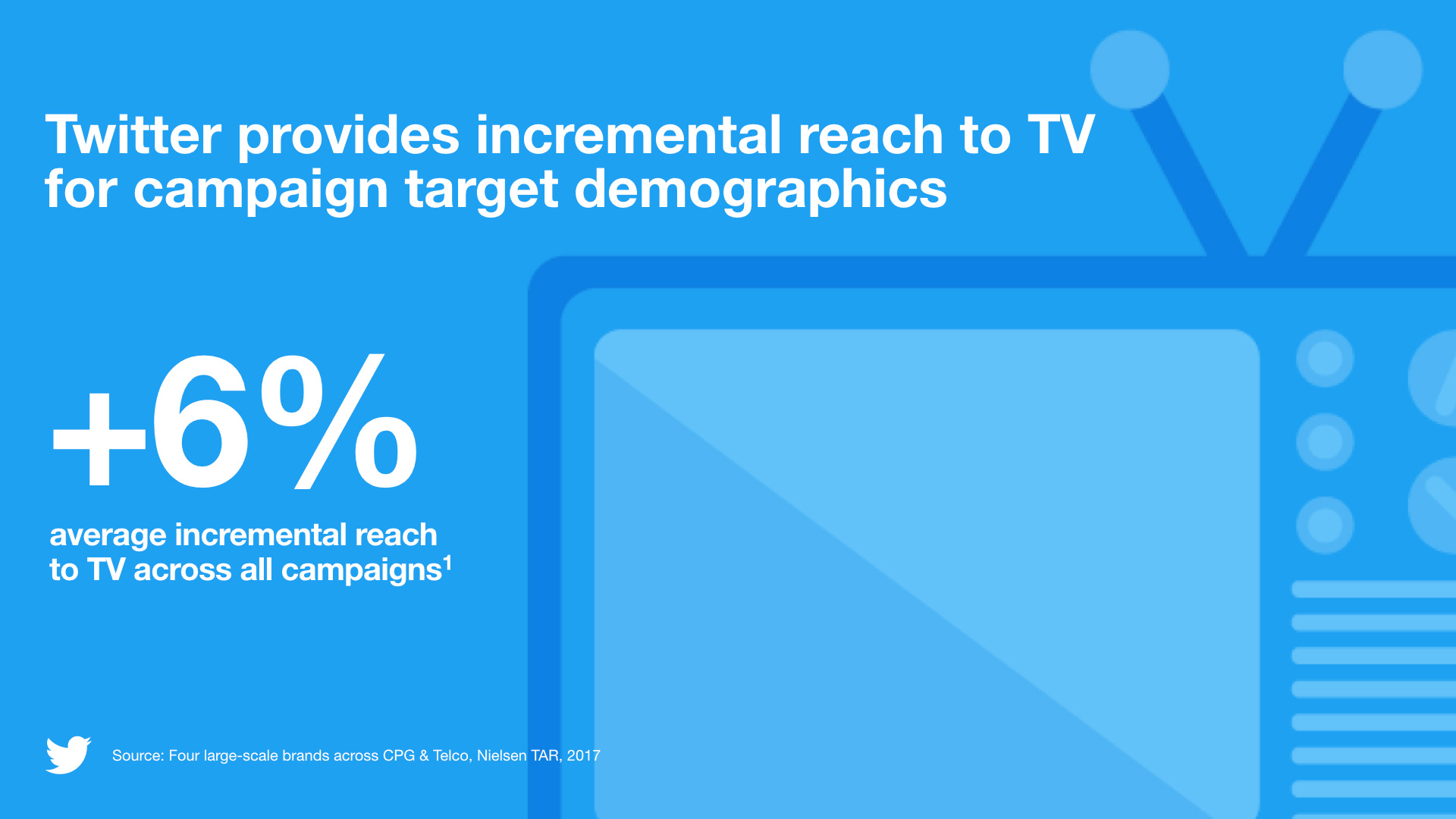 The study also found that Twitter’s incremental audience skews younger: 18- to 24-year-olds consistently showed the largest gains in incremental reach via Twitter compared with all other age groups and targets.

This point is critical for marketers. While this demographic is a digitally connected audience, it’s also one of the most elusive demographics to reach if relying solely on television.

According to the Nielsen Total Audience Report, in Q1 2017 “Generation Z” (those aged 20 and younger) consumed 50% less TV than Generation X and 66% less TV than Baby Boomers.1 However, Twitter saw an average of 25% incremental reach to TV among those aged 18 to 24 across the four campaigns measured.

Each of the campaigns implemented relatively broad audience targeting (most of the campaigns targeted 18- to 49-year-olds, both male and female). Twitter had a higher percentage of its impressions reach target audiences than did TV, to a tune of 40% more on average across the four measured campaigns. In fact, the study found that Twitter outperformed the Nielsen digital-on-target-percentage norms by an average of 14% for the measured campaigns.

These results point to Twitter being an increasingly strong supplement to TV.

Read more insights and case studies to discover other ways Twitter can help you achieve your marketing goals.

The study referenced Nielsen Total Ad Ratings data, which uses Nielsen Digital Ad Ratings tagging for Twitter exposure and connects it with Nielsen's television audience measurement. The result is an analysis that quantifies Twitter's unique unduplicated reach using metrics comparable to those used to measure TV for a given advertiser's campaign, ultimately providing a read on Twitter's incremental digital audience.

The research subjects were four large-scale advertisers from different industries, with campaigns running on Twitter and TV during heavy TV advertising periods (February–March 2017). Campaigns were measured at the ad account level, so all activity was measured across different ad products during the period.