The changing landscape of today’s movie industry has created great challenges and opportunities for marketers. Capturing a fan’s attention and driving them to the theater remains the primary objective, but how does a film successfully break through? The most effective campaigns require the right blend of creativity and timing to reach their audience. ‎#ITMovie and ‎#Kingsman are perfect examples of smart marketing campaigns on a platform built to closely connect brands and fans. While Warner Bros Pictures (‎@wbpictures) and 20th Century Fox (‎@20thcenturyfox) approached their Twitter campaigns very differently, both made waves that carried all the way through to the box office.

WB jolted moviegoers awake with its newest horror movie, “It.” The film, based on the Stephen King (‎@StephenKing) novel, raised the bar for horror flicks, breaking the record for the biggest launch ever in this genre — opening to $123 million in North America and $185 million across the globe. Knowing that horror fans index high on Twitter, WB’s marketing team utilized its greatest asset on the platform —the fans themselves.

Using an ad product called a Tweet Carousel, WB leveraged fan-generated Tweets in an easily swipeable carousel format. This word-of-mouth marketing empowered fans to speak up on behalf of ‎@ITMovieOfficial and share their initial reactions, which were filled with excitement and terror after leaving theaters.

Playing off of the nostalgia of the book and the 1990 TV miniseries, WB encouraged fans to Tweet out their own fan art, using the hashtag ‎#ITFanArtContest for a chance to win a trip to the premiere. From demonic digital art to petrifying pastels, some of the eeriest entries were Retweeted from ‎@ITMovieOfficial.

Soon after the premiere, director-producer sibling duo Andy and Barbara Muschietti hosted a Q&A at Twitter’s LA office in an effort to get direct feedback from fans on Twitter with the hashtag ‎#AskITFilmmakers. Answering questions ranging from what it was like to work with Jackson Robert Scott, the actor who played Georgie, to the funniest moment on set, Andy and Barbara were able to humanize the movie while connecting with their most important critics, their fans.

It's no small task opening a sequel to a better domestic haul than its predecessor, but that's exactly what ‎#Kingsman achieved over its opening weekend. "Clever" was the name of the social marketing game for the action-packed comic book comedy, with the momentum really kicking off the month prior.

The savviest marketers lean into the biggest moments that align with their brand, and ‎@20thcenturyfox did just that. Playing off of its Part 2 title, “Kingsman: The Golden Circle” captured August 2017’s solar eclipse conversations on Twitter by securing the Promoted Trend and a custom Golden Circle emoji to align with the solar eclipse. 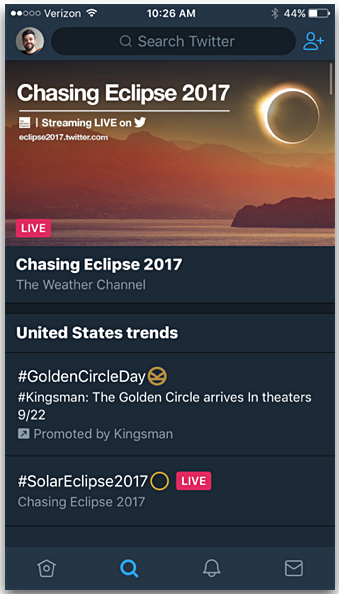 Fans who Tweeted with ‎#GoldenCircleDay and ‎#Kingsman rendered the eclipse-like emoji. With the eclipse trending all day organically on the platform alongside the ‎@KingsmanMovie Promoted Trend, the film drove millions of earned impressions, tapping into the day's biggest Twitter conversation.

Heading into opening weekend, ‎@KingsmanMovie again owned Twitter with a Promoted Trend, reserving the top trending spot for release day on Friday. It also refreshed its custom emoji with an Eggsy design that helped catch people’s attention in the Twitter Explore tab. 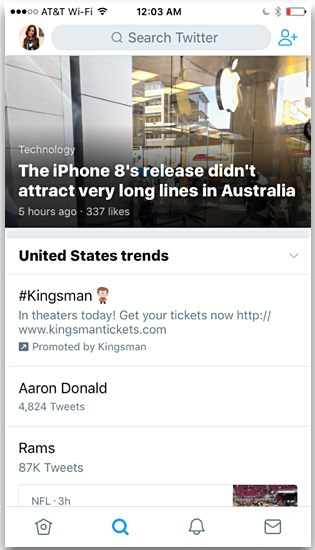 By conquesting marquee moments in the August 2017 solar eclipse and its own theatrical release a full month apart, ‎@20thcenturyfox successfully drove fan speculation and intrigue to make the popular spy sequel the talk of Twitter well in advance of its premiere.

How people on Twitter are navigating the new norm