On football’s biggest night, these brands were the winners off the field. 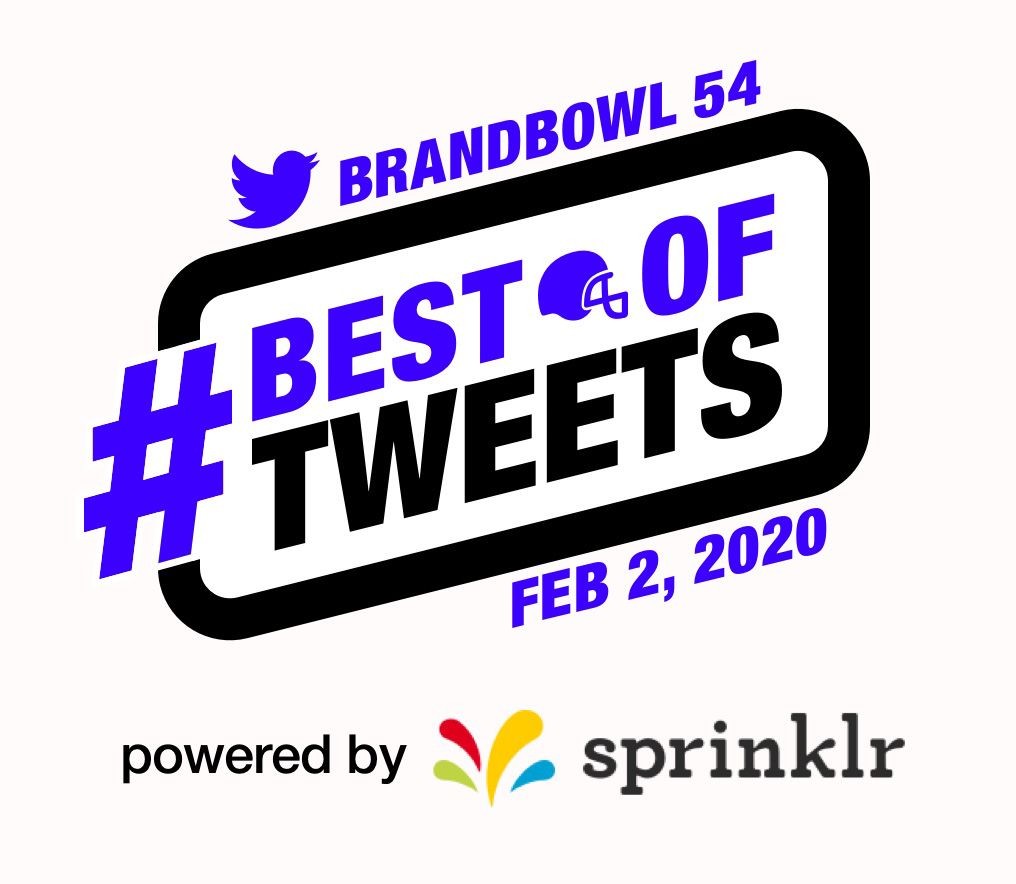 ‎#BestOfTweets, a roundup of the best brand campaigns and programs on Twitter, continues with BrandBowl54, Twitter’s annual celebration of the brands that get people talking on football’s biggest night. BrandBowl54 recognizes the brands that broke through the noise and connected to the game day conversation in the most creative ways, as selected by the creative strategy experts of Twitter Next, and informed by conversation data provided by official partner Sprinklr.

From the most-Tweeted-about brand to the brand with the most creative use of Twitter during the big game, check out the full list below.

The following categories are determined by Twitter Data, powered by Sprinklr 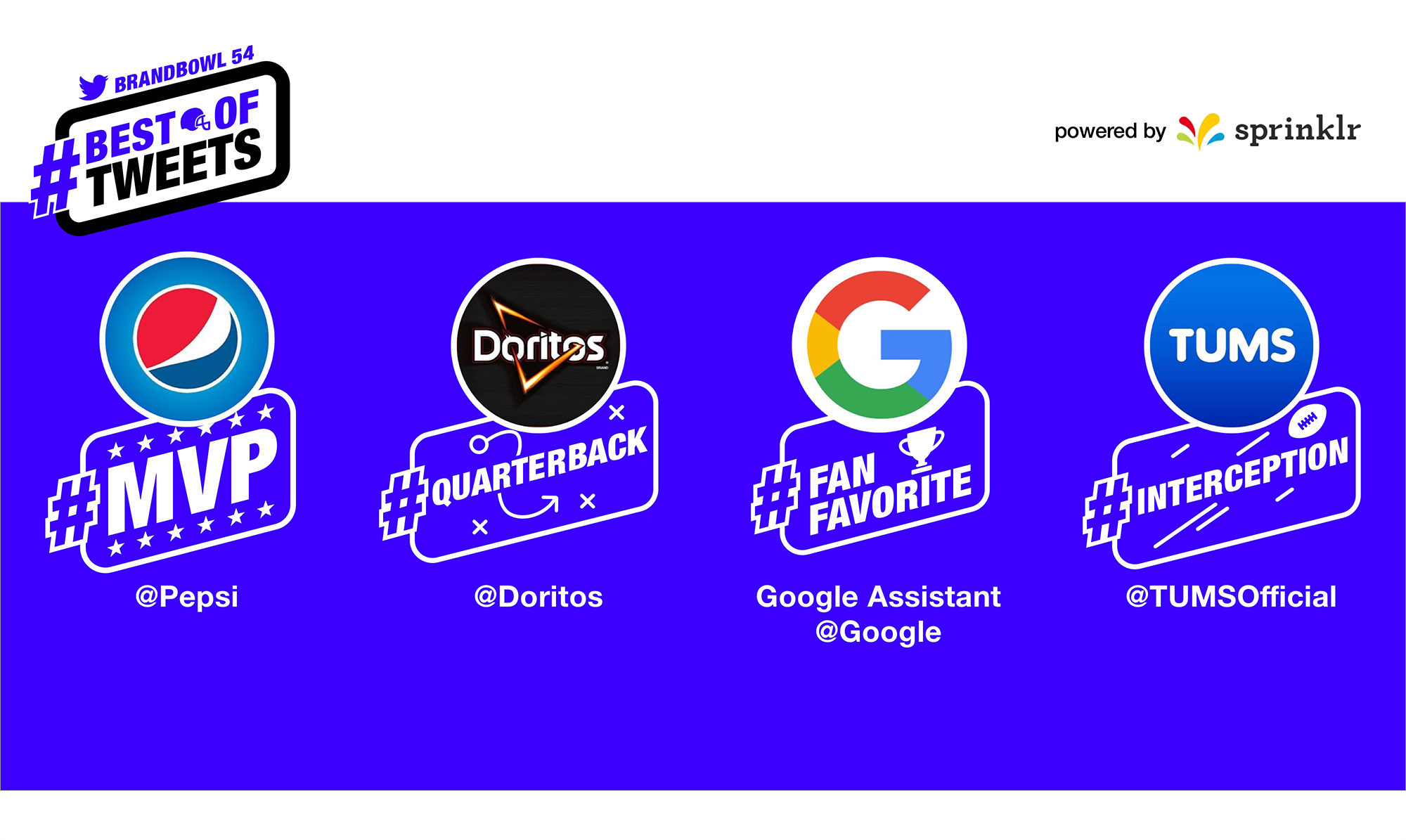 ‎#MVP:
The brand that drove the largest overall conversation among Super Bowl advertisers.

The ‎#PepsiHalftime show is an annual entertainment staple, and this year Pepsi turned ‎@Jlo and ‎@Shakira’s sizzling performance into a first-of-its-kind interactive experience. Fans got a chance to Tweet their predictions for how the top-secret performance would come alive, guessing everything from the number of backup dancers to the chance of a special guest performer. Tweeting a correct pick scored fans big prizes throughout the game. It also drove trial of their Pepsi Zero Sugar product, giving people an easy way to get reimbursed for trying the beverage. Pepsi’s multi-pronged approach worked, and they were the clear winner of this year’s MVP trophy. We will be drinking Pepsi Zero Sugar at the ticker tape parade.

‎#Quarterback
The brand with the most RT's on a single Tweet from a brand’s handle.

Fans didn’t get to see ‎@BillyRayCyrus dance (falling short of the required qualifer), but ‎@Doritos did get the most RTs of any other brand during The Big Game! People loved the western ‎#CoolRanchDance showdown between ‎@LilNasX and Sam Elliott.  It featured some great moves, a creepy-but-awesome mustache, and a whole lot of RTs (close to 3k to be more precise).

‎#FanFavorite:
The brand that drove the highest overall positivity compared to all other brands partaking in the SB conversation.

Google provided not only the biggest tear jerker of the night, but also the most positive sentiment for any campaign. The central figure in the beautiful story was the grandfather of a Google employee, who is missing his wife.  The TV spot perfectly showcased the usefulness and the ease of the product, which drove a lot of people to Tweet about how the spot tugged at their heart and got the attention of those around them (even at crowded bars).  It’s easy to see why this campaign was the ‎#FanFavorite.

‎#Interception:
The brand that drove the largest overall conversation that doesn't have a national spot.

‎@TumsOfficial won the Interception award thanks to their $54,000 or luxury vacation giveaway in the ‎#TumsWorthySweepstakes. The brand was the 4th-most mentioned brand, generating over 72k mentions. The numbers are even more impressive when factoring in they didn’t have a TV spot. They also get a lot of credit for one of the most clever uses of an emoji we’ve seen. By using the blue circle emoji 🔵, which resembles the antacid tablet, they essentially branded something that’s on everyone’s keypad. This all added up to the brand garnering serious attention for their campaign, and Tums is a worthy winner of the Interception Award.

The following categories are curated by the creative experts of Twitter Next.

‎#12thPlayer
The brand whose campaign best adjusts to real-time events as they unfold.

We loved Hyundai’s wicked ‎#smaht commercial, featuring Boston natives John Krasinski Chris Evans, and Rachel Dratch, and so did Twitter. The spot had a comical tongue-in-cheek use of the Boston accent, which translated very well to an entertaining Twitter conversation. In fact, the brand was using ‎#smaht in their Tweets, yet fans turned to using ‎#smahtpahk (which might be attributed to the the actors using it; whatever the catalyst, it stuck). Proving yet again that branding works, Hyundai took ownership of this feature that is not new to the industry by utilizing creativity and starting a conversation with the ‎#hashtags. What really stood out for this award, was a less noticeable element of their strategy. Hyundai's community management gets major points for hiring two Boston comedians to take over the ‎@Hyundai account. Bravo to ‎@RobertKelly and ‎@TonyVComic for their funny responses to people reacting to the TV spot, including other brands (which was a bit overused throughout the brand landscape, but it worked well in some instances like this).

‎#Connect
The brand whose campaign is best tied to the event.

Color the ‎#BigGameColorCommentary campaign the ‎#Connect winner!  Pantone’s clever spin on “advertising-based advertising” wasn’t a groundbreaking strategy, but it was effective.  They centered their Twitter activity around something central to their customer interaction: color samples. In doing so, it presented a creative canvas for their reactions to advertisers, the game, and other Twitter users.

‎#Hashtag
The brand that created a hashtag which resonated with the conversation and also reflected their brand messaging.

When a brand is able to turn their mission statement into a purpose-driven campaign, it’s bound to resonate. And, that’s exactly what ‎@OlaySkin successfully did with their ‎#MakeSpaceForWomen strategy. Their TV spot, which showcased women blasting into outer space, transcended across Twitter throughout the night. The brand gained so much momentum that, at one point, it blasted into the top trends in the United States. While we think the spot felt a little disconnected from the aspirational challenge, the overall positive message, charitable tie in, and clever, meaningful ‎#hashtag were on the mark. The hashtag, which was paired with a custom emoji that literally created space in the Tweet text, explained the brand’s partnership with ‎@GirlsWhoCode. But, many others organically jumped in in support of the initiative, praising Olay’s efforts and spreading the message, and of course, ‎#hashtag.

‎#Creativity
The brand whose campaign uses Twitter resources and creative hacks, rather than just promoted Tweets or video.

While most people will never hoist the Lombardi trophy, some fans can say their Tweets made it to the Super Bowl. The league turned to Twitter to ask fans to speak up and honored them by printing their Tweets on the official SBVI celebration confetti that rained down from the stadium onto the winning players. Some players even left snow angels on the field. The Tweet-confetti turned into one of the hottest souvenirs of the night, with fans clamoring to take home their iconic Tweets.

Sprinklr, a provider of enterprise software for customer experience management, analyzed Twitter data in real time during the Super Bowl on Sunday, February 2nd from the coin toss to the final whistle. Sprinklr identified the brands in the following categories on Twitter:

2. Most Positive Sentiment. Sprinklr’s Share of Voice metric is filtered to show only positive sentiment. Sprinklr Sentiment Analysis uses Natural Language Processing and Machine Learning to analyze and categorize opinions expressed by people on Twitter as positive, negative, or neutral according to the sentiment expressed by them. Sprinklr's Natural Language Processing and Deep Learning model is trained using huge volumes of pre-labeled datasets which enables the model to predict accurately for almost any kind of text. Pre-labeled training data is a dataset that is already labeled as either positive, negative, or neutral. Sprinklr's model is tested on new datasets and adjusted again and again until the model reaches the desired accuracy level.

3. Most Tweeted About Without an Ad Spot. Sprinklr’s Share of Voice metric is filtered to only include brands that did not have a TV commercial during the Super Bowl.

4. Most Retweeted: Sprinklr’s engagement capabilities are able to track all retweets of brands in real time.

If a person Tweeted about a Super Bowl advertisement without mentioning words or hashtags related to the Super Bowl, Sprinklr still collected that Tweet. Sprinklr achieved this by setting up listening queries for every single Super Bowl advertiser and celebrity in an ad ahead of the game. If a brand was mentioned during the game that didn’t have an official ad spot, Sprinklr immediately added a new query for this brand and back-filled Tweets to capture every single brand mention during the Super Bowl.