As the official beer sponsor of The Championships, Wimbledon (‎@Wimbledon) gave Stella Artois UK (‎@StellaArtoisUK) the chance to strengthen its association with one of the most prestigious occasions on the British sporting calendar, and helped it become the most talked-about beer of the summer.

With 64% of tennis enthusiasts taking to Twitter during big matches, ‎@StellaArtoisUK decided to use an In-Stream Sponsorship to tap into the buzz and own the conversation. By placing sponsored content at the start of ‎@Wimbledon live streams and highlight videos, ‎@StellaArtoisUK aligned itself with the best action from the tournament and put the brand at the forefront of viewers’ minds.

Alongside sponsored content, ‎@StellaArtoisUK introduced Conversational Cards to strengthen brand associations and get people talking, as they asked tennis fans to Retweet their views on some of Wimbledon’s most heated debates, such ‎#MurrayMound versus ‎#HenmanHill.

‎@StellaArtoisUK added the ‎#StellaWimbledon hashtag and a custom clinking beer glass emoji to Promoted Tweets to boost the conversation. While the classic ‎#JoieDeBière hashtag helped to maintain a continental flavour.

By using In-Stream Video Ads and effective audience targeting, ‎@StellaArtoisUK put itself at the centre of the action and became the beer that is synonymous with Wimbledon.

‎@StellaArtoisUK took engagement to a new level by using Conversational Cards to get tennis fans talking. 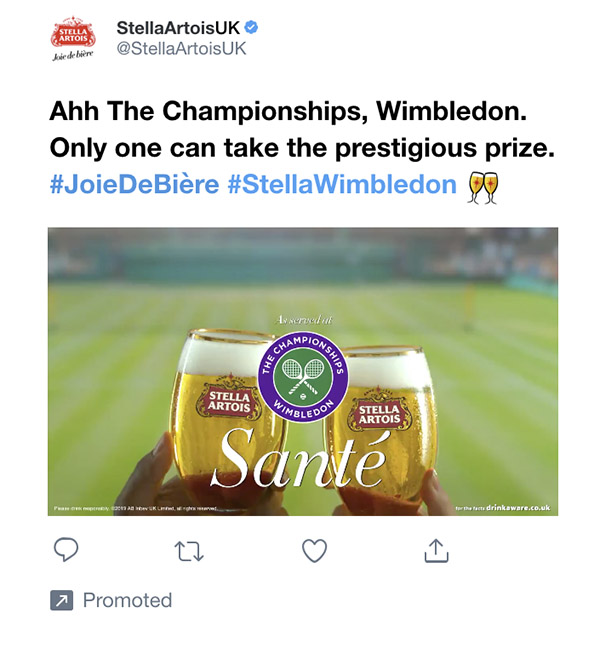 Enhance the conversation with a custom emoji.

Partnering with ‎@Wimbledon on Twitter boosted awareness and positive brand associations for ‎@StellaArtoisUK throughout the tournament, with a 13% increase in ad recall, a 7% lift in consideration amongst engagers and a 9% lift in favourability amongst video viewers. The ‎#StellaWimbledon Conversational Cards also saw a significant boost in engagement, achieving a 2.55% engagement rate.

We used Twitter to amplify our partnership with ‎@Wimbledon and be the most talked-about beer brand during summer. Twitter was effective in enabling us to join the national conversation and establish strong brand associations during this much-loved cultural event.