As part of the commitment by ‎@SamsungEspana to improving people's lives by putting technology to work on specific problems, and for the launch of its Addwash washing machine, the brand commissioned a study from Ipsos that revealed that only 3 in 10 men usually put the washing machine on.

‎@SamsungEspana saw Twitter as the ideal platform for promoting its product while giving visibility to a controversial social issue, via an amusing treatment using real people. The brand generated a movement around the ‎#YaNoHayExcusas hashtag, encouraging user involvement and engagement.

To see whether technology brings us more equality, ‎@SamsungEspana carried out an experiment in Jun, the most technologically advanced town in the world, where everything operates via Twitter. It ran a campaign on Twitter to tell people about the experiment, working together with ‎@wysitweet, ‎@performics_es y and ‎@StarcomSpain, using Twitter's creative palette. As a teaser, ‎@SamsungEspana launched a RT to Remind, where users received a personalised response with a video explaining the history of Jun and the pioneering network thought up by its mayor.

On launch day, it achieved major coverage with a First View and a Promoted Trending Topic and incentivised conversation with a personalised emoji. Once Jun had shown that household chores can be shared, it extended the movement to other users via an educational and humorous Chatbot, in which real residents of Jun gave advice on how to put a washing machine on.

In addition, through a Website Card, ‎@SamsungEspana enabled users to personalise their Twitter avatars to show solidarity with the movement for equality and make their commitment visible.

‎@SamsungEspana used the formats with the greatest coverage for its campaign launch, generating awareness of the ‎#YaNoHayExcusas movement and strengthening the brand's commitment to improving people's lives.

‎@SamsungEspana successfully took advantage of the various Twitter formats in line with the campaign objective, and at the end of the campaign summarised all the action, and the 'making of', in a Moment, our flagship storytelling format. 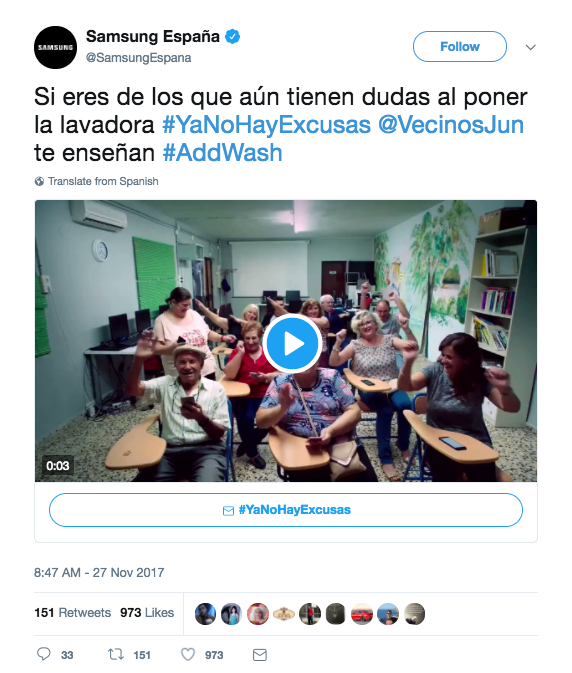 Making use of humour and personalisation, ‎@SamsungEspana achieved a high level of user participation. Users found the chatbot their best ally for resolving those doubts they had never dared to ask about.

With this campaign, ‎@SamsungEspana generated content within its strategic brand Tecnología con Propósito (Technology for a Purpose), once again suggesting technology as a solution to society's problems. What's more, it managed to do this in a humorous vein, providing solutions through innovative and useful tools such as the chatbot, which generated real-time responses, and with an original campaign that expressed all Twitter's creative options.

User engagement played a key part in the strategy of ‎@SamsungEspana, which managed to position itself in the centre of the conversation with its movement ‎#YaNoHayExcusas.

Twitter has been an excellent ally, at our side throughout the process and acting as a spokesperson to give visibility to an action where the stars are the residents of Jun, the world's most Twitter-friendly and technological town. In addition, Twitter helped us achieve the perfect balance between visibility and engagement.

‎#BestOfTweets: Some of the most creative MENA campaigns on Twitter