‎@O2’s cross-channel ‎#FollowTheRabbit campaign encouraged people to get out and explore a world of live experiences. Its centrepiece was a TV and cinema ad featuring a blue rabbit that symbolised curiosity, beckoning people to try new things.

‎@O2 turned to Twitter to extend ‎#FollowTheRabbit’s reach, and target three key audiences: people interested in live music, sport or entertainment events — whether they were regular attenders, or hadn’t yet followed their curiosity.

‎@O2 ran a First View campaign on Twitter to launch its campaign nationally. For 24 hours, its hashtag ‎#FollowTheRabbit appeared at the top of the UK’s trending topics list, while the first ad people saw in their timelines was ‎@O2’s blue rabbit video.

To give its First View video even greater reach and relevance, ‎@O2 ran it as a Conversational Ad with buttons tailored to its target audiences. People could click on the ‎#LiveMusic, ‎#LiveSports or ‎#LiveEntertainment button, and they’d be able to share a Tweet of the video along with a pre-populated campaign message.

Throughout the campaign, ‎@O2 found clever ways to get people to Tweet the campaign hashtag, in turn encouraging their own followers to ‎#FollowTheRabbit as well.

By running its TV and cinema ad as a First View video on Twitter, ‎@O2  was able to reach new audiences with an existing asset. 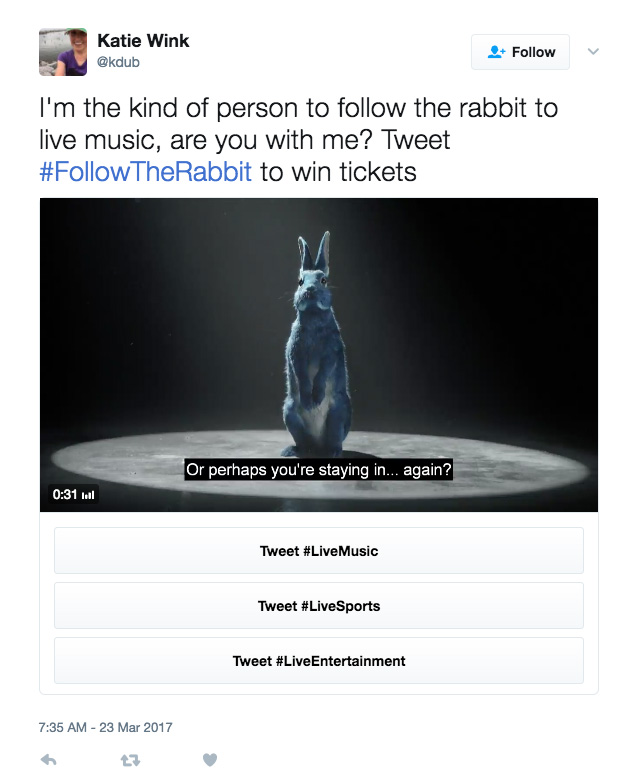 Encourage the conversation to continue.

By adding conversation buttons, ‎@O2  enriched its ad, making it interactive and giving it organic reach as people Tweeted it to their own followers

Let your customers' voices be heard.

By asking people to Tweet about their live experiences for a chance to win tickets, ‎@O2 (and its ‎@O2music and ‎@O2sports accounts) gave its campaign social proof and further organic reach, meanwhile increasing awareness and excitement around upcoming events.

With its First View campaign, ‎@O2 drove 2.1 million video views of its ‎#FollowTheRabbit ad on Twitter. And it succeeded in encouraging people to Tweet with the hashtag — a total of 11.2 thousand times over.  The campaign achieved a 1.9% average engagement rate.

O2 believes life doesn’t come with catch-up and that nothing beats being there live. Twitter was the ideal media to communicate this ethos to our UK customers by extending and amplifying content and live experiences in real-time across sport, music and entertainment.