On the 10 September, Land Rover (‎@LandRover_UK) revealed the new Land Rover Defender — the highly anticipated relaunch of one of its most iconic vehicles. For the brand, the new model represents 70 years of innovation and improvement, with the launch aiming to take into account the vehicle’s heritage while staying relevant as a car for the 21st century.

To get its message across, ‎@LandRover_UK targeted a broad brand audience of those with an interest in Land Rover as a whole.

The launch reveal was live-streamed from the Frankfurt Motor Show, and it achieved 260K views and 10,000 people watching live across all channels.

The launch was a significant moment in ‎@LandRover_UK’s history, and it aimed to capitalise on the huge interest from the media about what was next for the Defender. The campaign’s aim was to maximise the buzz and conversation around the reveal.

The brand turned to Twitter to amplify the tease and reveal of the new Defender, and to reach as many relevant people as possible. Twitter’s role in the launch of the new Land Rover Defender was to drive mass awareness and engagement across the platform.

The audience was targeted with a tease of the new car, with an option to be reminded when Land Rover was making its eagerly awaited announcement. ‎@LandRover_UK then followed this up with hero content and selected Twitter products to drive engagement to take advantage of the increase in the volume of conversation.

“Like to Remind” Tweets enabled Land Rover to gather a pool of people who would be tuning in to the reveal moment. 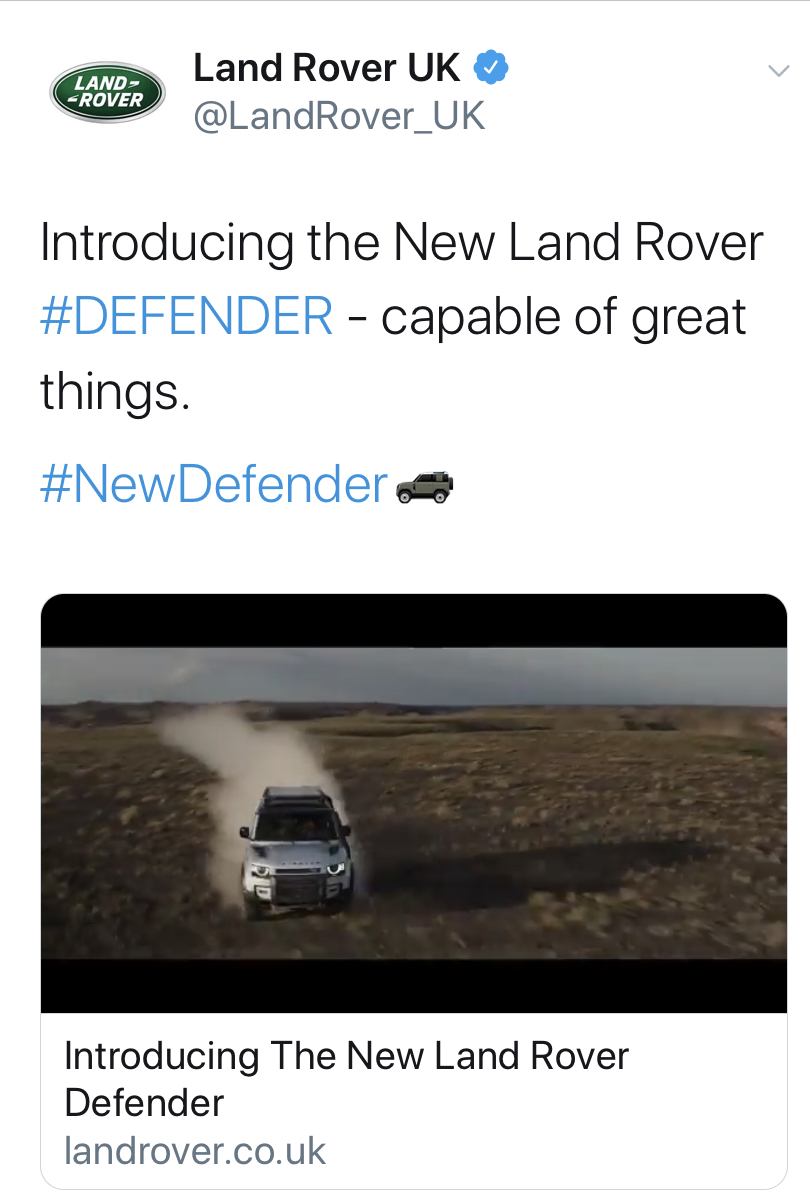 Land Rover drove engagement among these people with the launch of its hero video.

Land Rover continued to build a large retargeting pool with a Promoted Moment and Promoted Poll, keeping the Defender top of mind for people interested in the new vehicle.

Entertain with a poll and emoji.

Land Rover’s use of Twitter helped drive huge amounts of buzz and conversation for the launch of the new Defender. With 2.6 million video views, the brand was able to reach a large audience at scale in very cost-effective way. The strong engagement rate and the 15K* uses of the emoji/hashtag also demonstrated the widespread interest in learning more about the new Defender.

The combination of products that we used on Twitter allowed us to engage with our audience and continue the conversation in a fun and interactive way. The Like to Remind Tweet was ideal for setting up our live reveal moment.

BMW drives emotional appeal for its i8 Roadster on Twitter