Marks & Spencer (‎@marksandspencer) faced tough conditions in 2016 having lost relevance with women aged 45-plus. It spotted an opportunity to emotionally reconnect with its core audience of female shoppers when discovering that almost half of British women consider there to be a lack of strong female role models today. ‎@marksandspencer built its Christmas campaign around a new, relatable character of Mrs Claus; representing the values and personality of women across the UK. M&S wanted to build anticipation around the upcoming launch of its ‎#LoveMrsClaus campaign, and once itsTV ad had premiered, the retailer used social media platforms including Twitter as a way to encourage its lost audience to emotionally engage with the campaign, and share their Christmas wishes.

The day after the ad launched, ‎#LoveMrsClaus topped the trending topics list for 24 hours as a Promoted Trend. A custom ‎#LoveMrsClaus gave people an extra incentive to join the conversation.

Creators, who shared engaging content with M&S’s target audience, were brought on to develop content reflecting what its customers would be going through during the build up to Christmas. Working with three lifestyle creators (‎@F_of_Daughters, ‎@dollybowbow, ‎@katelavie) and two animators (‎@Katy_Beveridge, ‎@dylan_blau), the excitement of Christmas was brought to life with M&S at the heart of each piece. Content was whitelisted, with the animations also being uploaded on M&S channels.

Running its video teaser with details of when to watch for the new ad created buzz and drove tune-in for the ‎#LoveMrsClaus premiere.

By using its TV ad as a Promoted Video on Twitter, ‎@marksandspencer reached audiences who had missed the ad the on air, whilst giving people who had already seen ‎#LoveMrsClaus on TV the opportunity to share and engage with the ad on Twitter. The ad was supported by a Promoted Trend; allowing ‎@marksandspencer to ensure that Twitter users across the UK were exposed to ‎#LoveMrsClaus across the weekend of its launch. 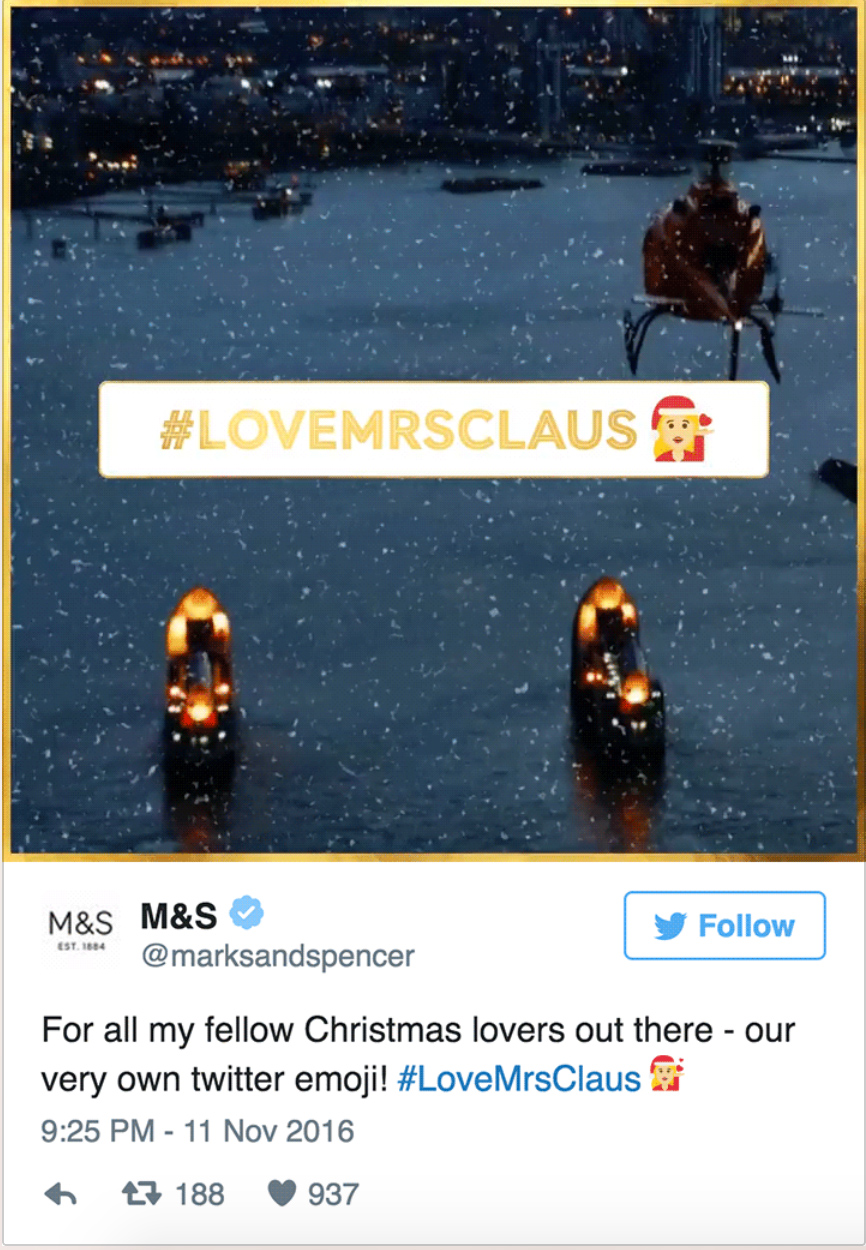 Encourage hashtag use with a custom emoji.

A special Mrs Claus custom emoji was designed to appear when people Tweeted ‎#LoveMrsClaus, ‎@marksandspencer. This meant that Mrs Claus could converse directly with the thousands of Twitter users talking about her; helping to gain organic reach for the campaign.

Partnering with creators who shared authentic and bespoke content featuring M&S products helped to position M&S as the place to shop at Christmas. The strategy enabled M&S to profit from the creators’ followers; connecting with new, highly engaged audiences.

‎@marksandspencer reported that its ‎#LoveMrsClaus campaign on Twitter succeeded in lifting brand metrics across the board. The brand found an 11 percentage point increase in people’s association of M&S with ‎#LoveMrsClaus after four exposures to the Twitter campaign.

Expand to see examples from this case study

Twitter allowed us to open conversations in which a real-time response team created a human experience of Mrs. Claus among our target audience. Furthermore, the use of the trend generated strong results, allowing ‎#LoveMrsClaus to have continuity across the weekend of launch.

Breitling connects with watch experts and buyers at Baselworld 2019