New research highlights that Twitter’s audience is hugely influential. People on Twitter are in the know, are more likely to hear about news first, and are the people their friends turn to when making purchasing decisions. For brands, that means advertising on Twitter is a more efficient way of reaching the right people.

When it comes to influencing purchasing decisions people are more important than traditional media. That insight means there is a significant opportunity for brands on Twitter. Why? Because our audience is not only influential, it is unlike any other, and you’ll find it all in one place.

These are some findings from a research project conducted for Twitter by Tapestry1. We set out to discover how people on Twitter affect the purchases of their friends and what some of the traits of Twitter users are.

This goes to the very heart of what Twitter is about as a platform and what makes it unique. Put simply, Twitter is about what’s happening. It’s where news breaks, and the people who use Twitter tend to be in the know. They are often the first to hear about things. And when they do, they then share what they’ve discovered. When they do this, what they share often goes beyond Twitter, as what happens on Twitter doesn’t stay on Twitter. It makes its way into newspapers, websites, TV, and radio because Twitter is at the heart of conversations taking place around the world.

Three in four said Twitter users were the first people they looked to for advice when they wanted to learn more about a topic.

Furthermore, over half of those surveyed said a Twitter user made them aware of new brands or products for the first time. We also found that people on Twitter are not only influential, but they’re perceived as being trustworthy, well informed, generous, and intelligent.

It’s these qualities that contribute to other insights the study identified, such as: one in two people said Twitter users helped them become more familiar with different aspects of a product. 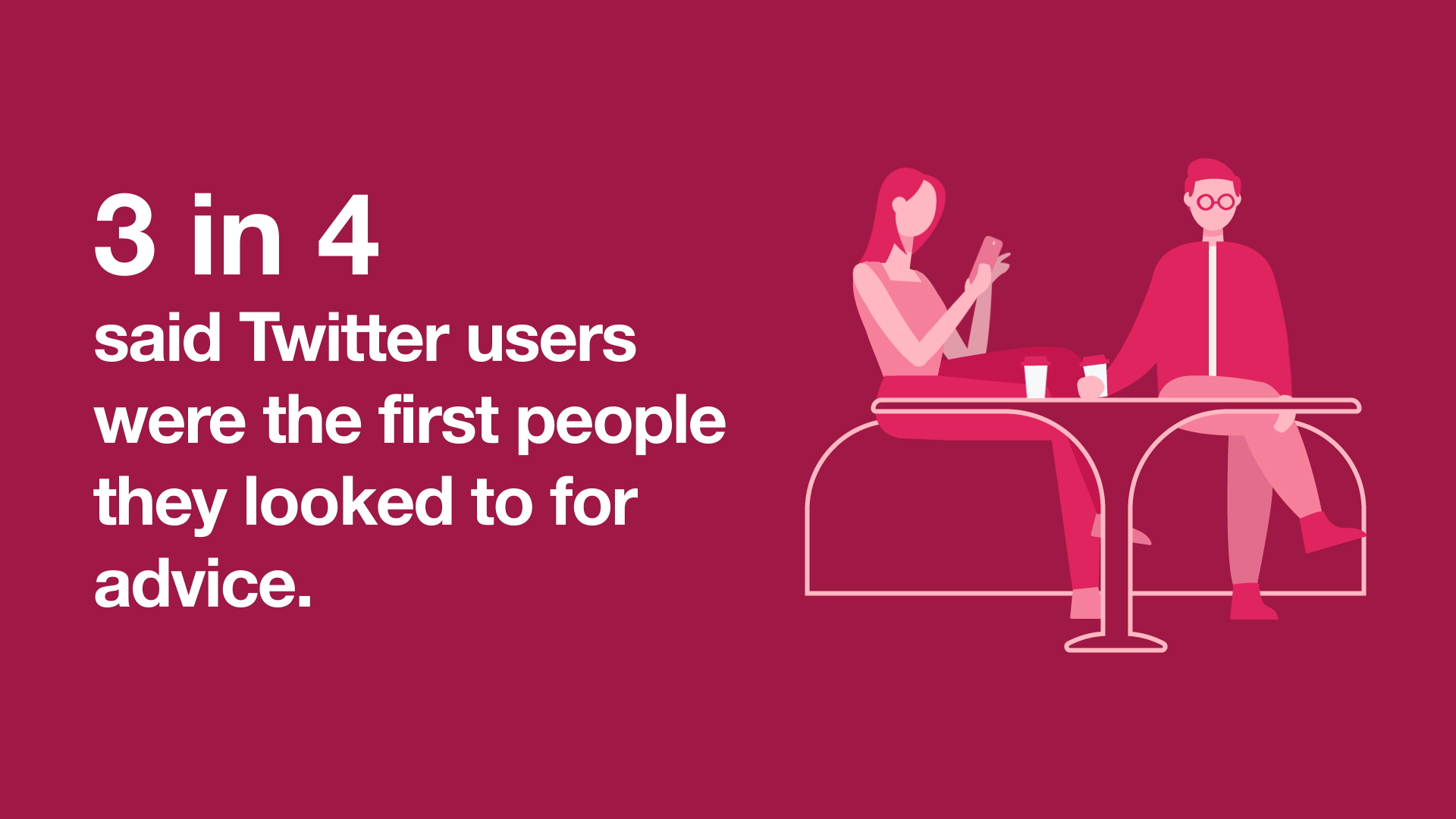 So what does that mean for brands?

By being influential, Twitter users are more likely than others to sway the opinion of others. This also is true when it comes to buying new products or services. Notably, this happens throughout the purchase journey. We found that Twitter users are more confident when making a purchase, which may well be why others go to them for advice.

Twitter users influence the decisions and opinions of others.

The study found that nine in 10 people said they changed their opinion about a purchase because of advice that was given to them by someone they knew on Twitter.

This makes perfect sense, because of what we mentioned at the start of this article: People are more important in influencing our purchasing decisions than traditional media.

For brands, the bottom line is this: Advertising on Twitter is a more efficient way of reaching the right people. Why? Because your brand message will be amplified in a way that’s unique to Twitter, and because your brand is reaching the most influential group of consumers out there. Click below to see our short video about Twitter's Influential Audience.

Adapt to survive: Why brands should maintain a presence in uncertain times

‎#BlackLivesMatter: Listening and learning from Black voices on Twitter