From TVs to beertails: how chatbots help brands engage consumers on Twitter

Chatbots enable brands to be more relevant by creating meaningful connections with consumers.

53% of people who Tweet to a brand expect a response within one hour, according to a report from Lithium Technologies.

One hour. That’s not much time to respond to Tweets or Direct Messages at scale. Unless, of course, your brand has a Twitter chatbot – which can instantly interact with countless consumers whenever, wherever.

There are plenty of concerns about what chatbots can and can’t do. Some marketers believe chatbots can’t add the personalised touch needed to nurture leads or deliver satisfying customer service. Others think chatbots are too limited in what they can say – that chatbots can only respond to a few basic questions. And chatbots have only gained traction in the past year or two, so they’re not even close to achieving their full potential.

But here’s the reality: Chatbots are enabling major brands to communicate one-on-one, create a meaningful connection with consumers, save them time, and drive sales – at a scale not otherwise possible. Automated customer engagements via chatbots are helping many companies nurture leads while reducing customer service costs.1

Chatbots are set to become a common channel through which businesses connect with customers. In fact, information technology research firm Gartner predicts intelligent automation tools like chatbots will handle 85% of customer relationships2 by 2020.

By 2020, Gartner predicts intelligent automation tools like chatbots will handle 85% of customer relationships.”

Across verticals and regions, brands like Samsung Australia, Wendy’s, MTV, and Patrón are using chatbots on Twitter to engage customers. The combination of public Tweets and private Direct Messages make chatbots easier for Twitter users to engage with, discover, and share, and 83% of people on Twitter say they’re open to discovering new things,3 making Twitter a prime place to connect with customers. Direct Messages give brands more flexibility in communicating with their audience on Twitter. Direct Messages can be up to 10,000 characters long and include images, GIFs, video, and various Twitter Cards.

To better understand how chatbots can create better customer engagements, consider fictitious sports fan Josh. As a huge fan of the March Madness basketball tournament, he’s always on the lookout for the latest news about the tournament. As the tournament approaches, he sees a Tweet from Wendy’s that invites him to quickly create his bracket in Direct Messages with Wendy’s March Madness bracket builder chatbot. Josh shares his bracket with friends and fellow fans and receives frequent updates on how his tournament predictions are faring.

Josh is planning a March Madness party with his friends. As someone who talks about sports on Twitter, he's a great candidate to target with an ad about the latest TV technology. While browsing Twitter, Josh sees a Samsung Promoted Tweet that leads him to Samsung’s TV Assistant chatbot.4 Within seconds, it recommends the perfect TV for his party based on his interest in sports, his room’s dimensions, and the distance he typically sits from his TV.

As the party approaches, Josh Tweets about it enthusiastically. Based on those Tweets, Patrón Tequila targets him with an advertisement to find a signature cocktail based on the type of party he’s having. Josh goes along with this, and starts chatting to Patrón’s bot-tender, telling it he’s having a house party and wants to offer guests something citrussy. Seconds later, the bot-tender’s suggested “beertail” recipe is delivered via Direct Messages.

Brands are using chatbots to engage consumers throughout the marketing funnel, from awareness (at the top) to purchase (at the bottom).”

Brands are using chatbots to engage consumers and create interactions that enhance their marketing initiatives. 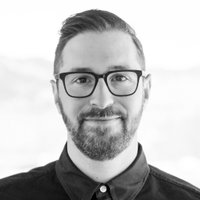 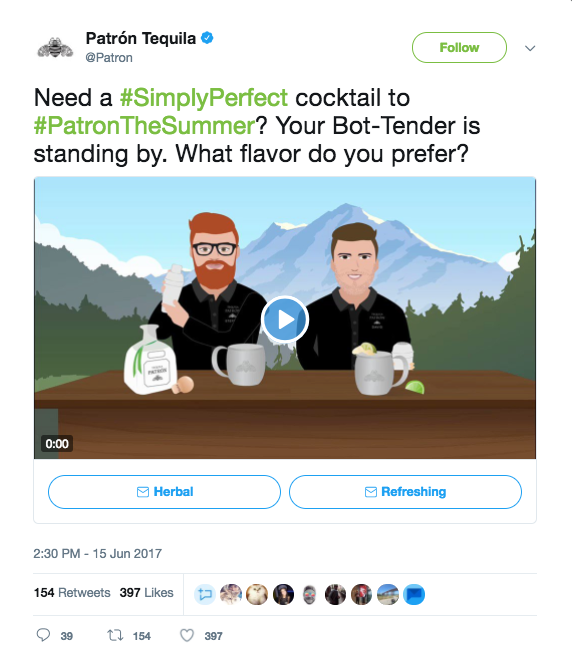 At the understanding intent stage

Patrón’s bot-tender helped the spirit maker better grasp customer preferences. And 39% of cocktail suggestions served up by its bot-tender sent consumers to the Patrón website for recipes. 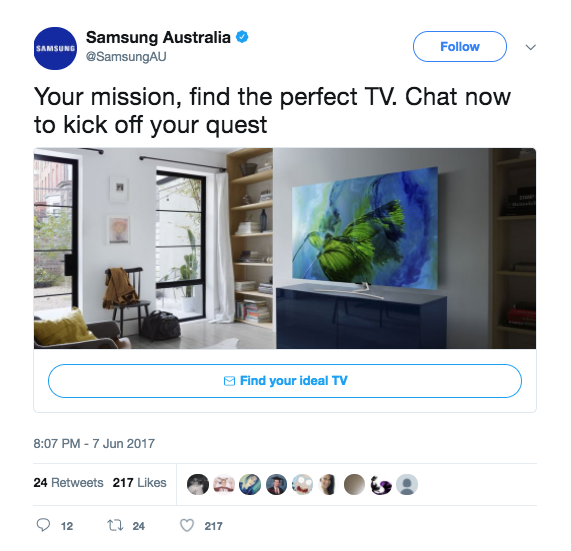 In the evaluation stage

Samsung’s chatbot helps potential buyers cut through the various options and decide which model to purchase. The chatbot enabled the brand to generate sales leads at a quarter of the average cost.

Most consumers are already comfortable with chatbots.

In the next year or two, expect chatbots to become even more sophisticated. Artificial intelligence and machine learning will continue to evolve, enabling brands to provide a wider range of intelligent responses to consumer queries. And as chatbots evolve, so too will consumers’ expectations.

Research shows that the majority of consumers – 65% – are already comfortable engaging with brands via chatbot, and that they appreciate how chatbots speed up interactions.5 That comfort level is only expected to increase.

Today, a growing number of brands recognise the value of chatbots. In a late 2016 Forrester survey, 49% of marketers and digital business executives said they were currently piloting or planning chatbots to connect with customers.6

Only 5% of brands said they’re already using chatbots regularly. So there’s still plenty of opportunity to get ahead of your competitors.