However, as competition between mobile apps is particularly high during this period — especially with key holidays such as Christmas and New Year’s Day occurring consecutively — the company needed to reach its gaming audience in a unique way. Faced with heated competition, ‎@abyssrium took to Twitter to launch a branding and performance campaign to boost awareness and engagement.

To maximise results throughout the holiday season, ‎@abyssrium took an approach that combined both branding and performance tactics for its ‎#アビスリウムよいお年を (‎#AbyssriumHaveAGoodYear) campaign on Twitter. Five short-form video creatives were developed for the mobile app promotion campaign and amplified via First View on 16 December in order to drive massive reach and awareness for the game. The videos were housed within Twitter’s Video App Cards to promote app downloads among new users and re-engage existing users.

In the second half of the campaign, ‎@abyssrium worked to further engage audiences by encouraging them to participate in a lucky draw to win exclusive game prizes. In order to qualify, consumers had to Retweet any of the five key campaign Tweets and download the game through the link to the app store, using the install button on the Video App Card. ‎@abyssrium then tracked campaign participants to determine the winners. 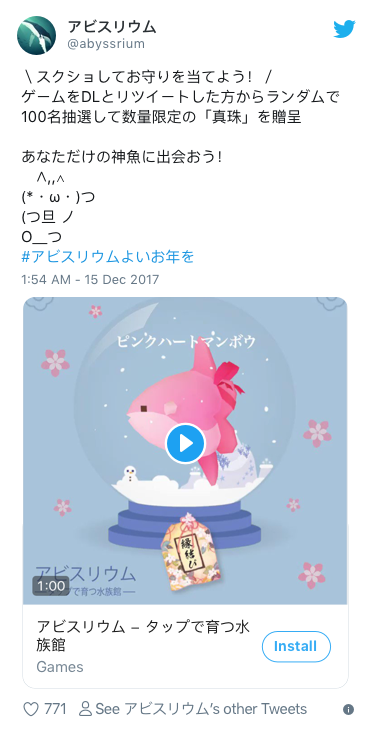 ‎@abyssrium’s unique use of Twitter’s First View and Video App Cards led to a sharp positive spike in app downloads, allowing the brand to achieve both performance and branding outcomes from this campaign. 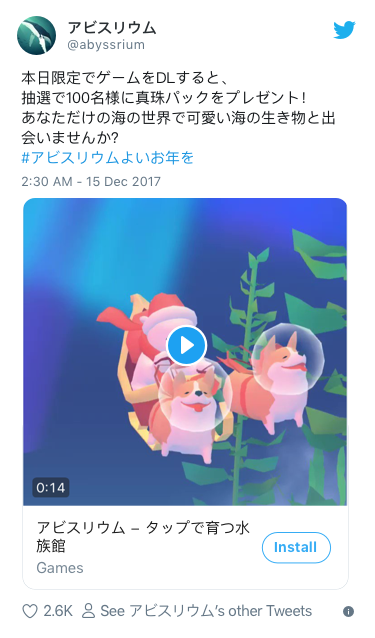 By integrating Twitter’s organic Retweet feature into the campaign’s lucky draw mechanics, ‎@abyssrium byssrium was able to multiply awareness for the brand, game, and campaign as more consumers took part in the lucky draw.

To better engage its audience, ‎@abyssrium developed content featuring localised Japanese-style visual graphics and kept in line with the festive Christmas theme. This was adopted across video creatives and Japanese emoticons (kaomoji) as featured in the Tweet copy, which allowed the audience to relate to the content more easily.

The campaign drove over 12.4K downloads for the application on 16 December via Twitter alone, as well as a 25% increase in intent to play the game among audiences who were aware of the game and campaign. This helped ‎@abyssrium gain an edge over other mobile app development companies during the highly competitive festive season. Brand recall, awareness, and familiarity with the Tap Tap Fish game were also elevated with the campaign, with the average engagement rate of the First View campaign exceeding the benchmark in Japan by 2.6 times.