As an official sponsor of the Australian Football League (‎@AFL), NAB (‎@NAB) not only sponsors the game, but grows it. In order to celebrate its long-standing partnership with the AFL, and capture the excitement and anticipation of fans for the upcoming season, NAB used Moments to engage football fans and be first-to-market with a new advertising product.

Working in collaboration with Twitter and Clemenger BBDO Melbourne (‎@ClemsMelb), NAB created a bespoke video series starring AFL personalities, fans, and junior players talking about what they were most looking forward to in the season ahead. NAB used a Moment to extend the range of its campaign and provide fans with a rich media story for them to explore. Promoted Tweets targeted AFL-related keywords and followers of AFL personalities and teams. 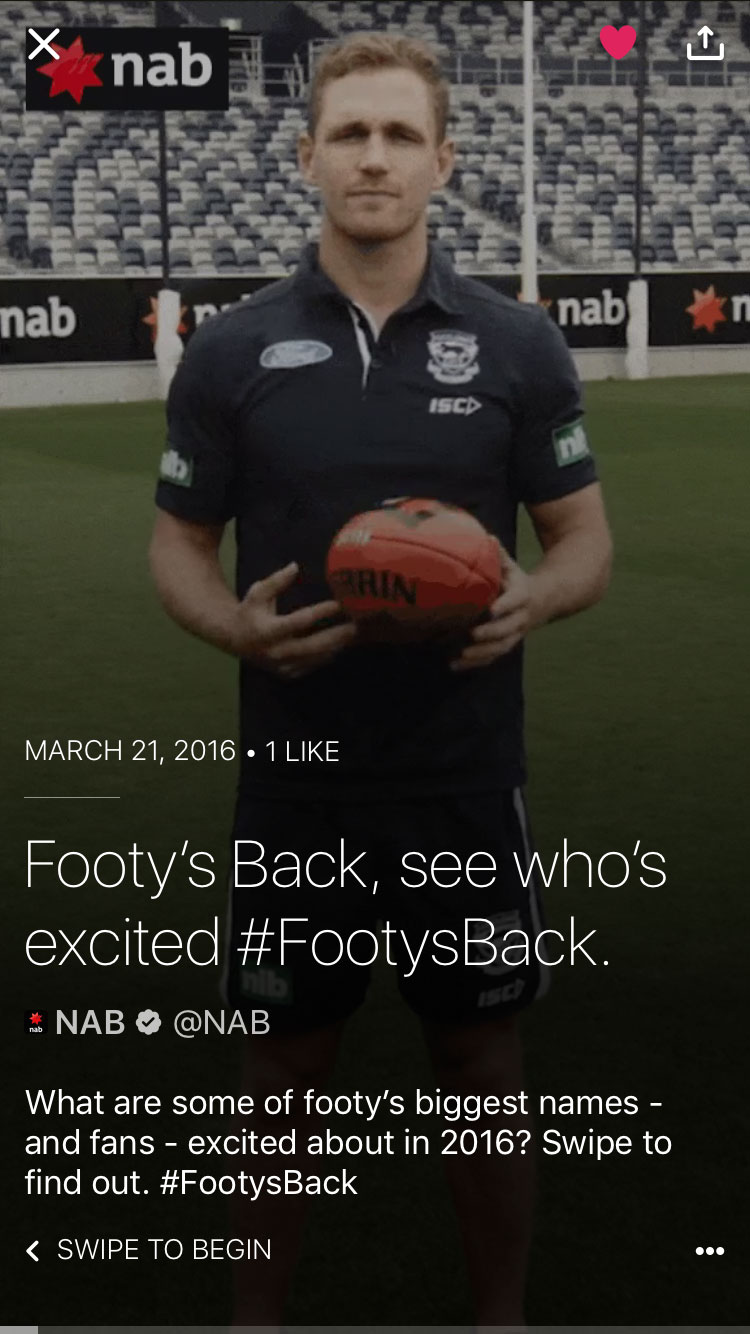 Use innovative products to grab attention.

NAB was the first brand in Australia to use a Moment to create an immersive storytelling canvas and boost the campaign’s reach. The Moment, which included a Promoted Trend using the hashtag ‎#FootysBack, featured prominently in users’ feeds and provided the brand with 100% share of voice (SOV).

Connect to your audience’s passions.

NAB’s sponsorship of the AFL extends from grassroots (NAB AFL Auskick) through the NAB AFL Rising Stars developmental path, and on to the elite level. The brand created rich content that featured players from all levels of the game, representing the breadth of the sponsorship properties.

Widen reach with influencers and celebrities.

NAB also whitelisted Tweets from ‎@AFL and AFL stars like Tex Walker (‎@texwalker13) to increase the scope and reach of the campaign. It also further united users through their love for the game, and provided a timely “inside scoop” from personalities on the upcoming season.

The ‎#FootysBack campaign generated huge buzz in the lead-up to the opening round of the 2016 Toyota AFL Premiership Season, with a 178X increase in conversation using the ‎#FootysBack hashtag on the day of the Promoted Trend and ongoing conversation during the opening weekend of the AFL season. The Moment led to stronger campaign performance compared to benchmarks, with 2.44 million Trend and Moment impressions, 410,000 Trend and Moment Tweet impressions, and an engagement rate of 16.8%. ‎@NAB obtained a 130% increase in new followers on the day of the Promoted Trend, and a 138% rise in mentions. The supporting Promoted Tweet campaign drove an additional 2.08 million impressions and 15,800 engagements.

Moments gave us an opportunity to use rich media formats in a very engaging and surprising way. Moments open up the platform to make a very compelling consumer experience. We could tell the story in a really interesting way using the key celebrities that are active in our sponsorship.