The ARIA’s (‎@ARIA_Official) mission is to champion Aussie musicians both locally and around the world. Every year since 1987, it holds a series of awards nights called the ARIA Music Awards, recognising achievements by the Australian music industry.

In 2017, ARIA wanted to take a local awards show and make it global through enhanced online conversation. The main problems they faced were:

The live stream was hosted by Ash London from Hit Network’s ‘Ash London Live’, comedian Joel Creasey and Aussie model, actress, singer, and social influencer Alli Simpson. The hosts provided commentary as they introduced some of the world’s biggest stars to a global Twitter audience.

On the night, it was also announced which musician or band Twitter fans had voted as the Best International Artist. Fans could vote by Tweeting using unique hashtags which also generated emojis of the related artist. The live stream was later packaged up into a condensed highlight reel to allow fans to catch up, who had missed the live show, or just relive the action and excitement of the ARIAs Red Carpet.

Fans needed to engage with the ARIAs via Twitter to influence the outcome of the Best International Artist award. This ensured large numbers of global music fans engaged with the campaign, supporting their favourite international artists.

Music fans already come to Twitter to engage with their favourite artists one-to-one. The ARIA Music Awards acted as a natural extension of this, providing fans with a backstage, unfiltered glimpse of some of the world’s biggest stars, with the live stream generating huge viewing numbers as a result. 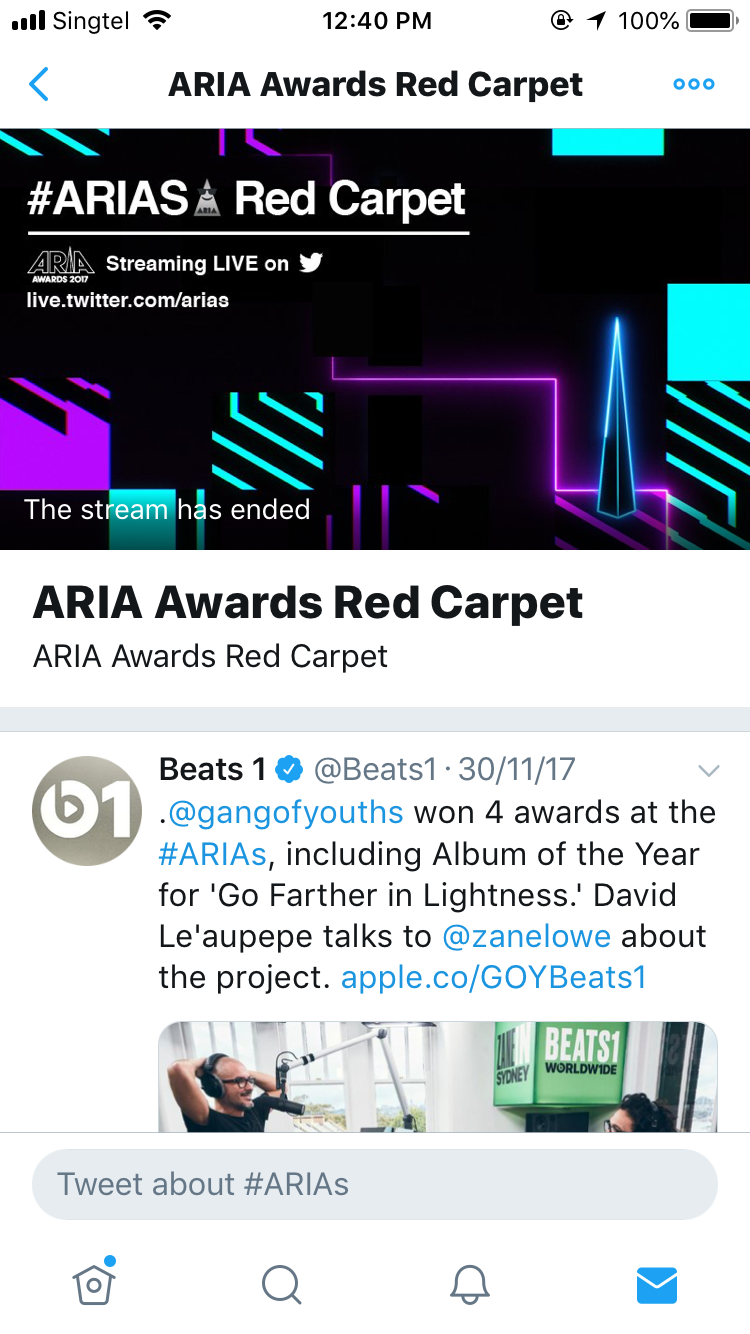 The ARIAs succeeded in its engagement goals by changing tack and exploring a different method of live content delivery. Music fans were able to engage with the show, while also connecting with the wider Twitter community, delivering a more immersive and entertaining viewing experience.

By combining active voting with an already engaged, musically focused audience on Twitter, ‎#ARIAS was able to trend number two worldwide across 18 countries and 200 cities and number one in Australia. The Tweet hashtag voting system drove engagement in the 6 weeks prior to the event, generating a staggering 12.6M Tweets using the ‎#ARIAS hashtags.

Twitter is an incredibly important platform for the ARIAs. It enables us to access music fans around the world. Our mission is to champion Australian artists, and Twitter is the perfect platform for us to reach an audience outside of Australia