With the upcoming Winter Games, a major football event this summer, the Commonwealth games, Test cricket, and, of course, the fast-approaching Six Nations championship, 2018 will be a big year for sports fans – and for marketers hoping to engage them.

Fans uniquely turn to Twitter during live events as their second – and primary – screen to learn what’s happening in real time. Across key live entertainment and sporting events throughout the world, Twitter, on average, sees a +4.1% lift in unique visitors while other social platforms, in aggregate, see no significant change according to comScore. The difference is even more pronounced with tentpole sports events. During the 2017 Super Bowl, Twitter saw a +19% lift in unique visitors (versus average Sunday traffic) while other social platforms, in aggregate, saw a decline in unique visitors. 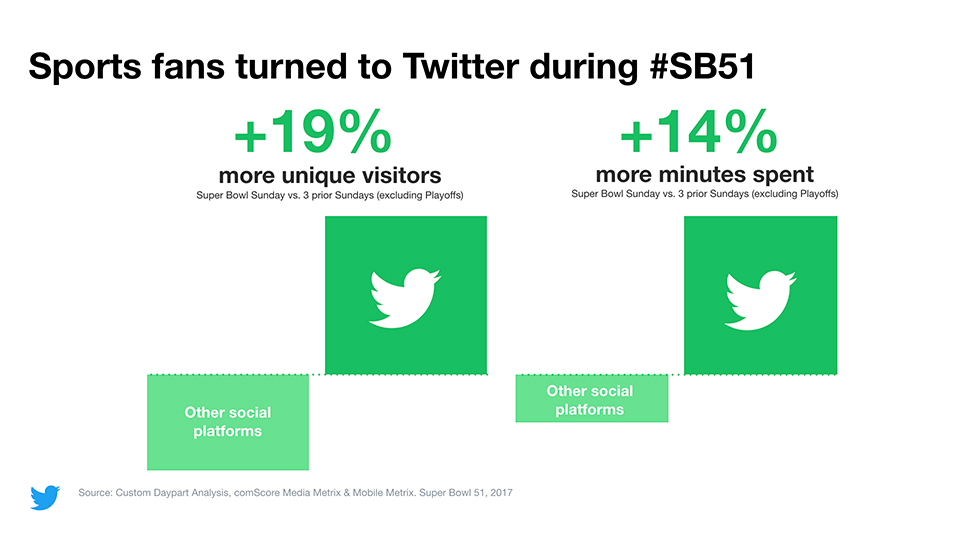 We commissioned a study from Neuro-Insight (‎@neuro_insight) to learn why sports fans flock to Twitter. Using advanced biometrics, the study reveals how Twitter has changed the live viewing experience for sports fans and how that impacts brand advertising.

When Twitter is used as a complement to TV, users show higher levels of engagement (+31%) and memorability (+35%) than when only following the event on TV.

In addition, when Twitter is the only source for following a sports event, users also exhibit higher engagement (+60%) and memorability (+59%) compared to TV-only viewing, demonstrating the immersive experience a curated sports timeline can produce. 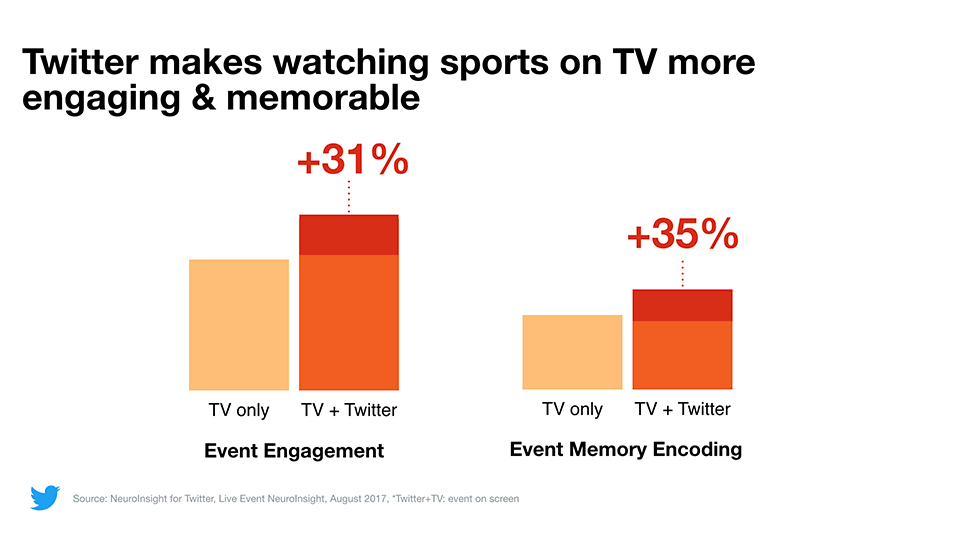 Because Twitter makes live sports more engaging and memorable, advertising has more impact on fans following sports on both Twitter and TV.

Twitter users following sports on TV and Twitter show higher levels of engagement (+42%) and memorability (+52%) of Twitter ads in the timeline, compared to TV ads seen among people following the event only on TV. 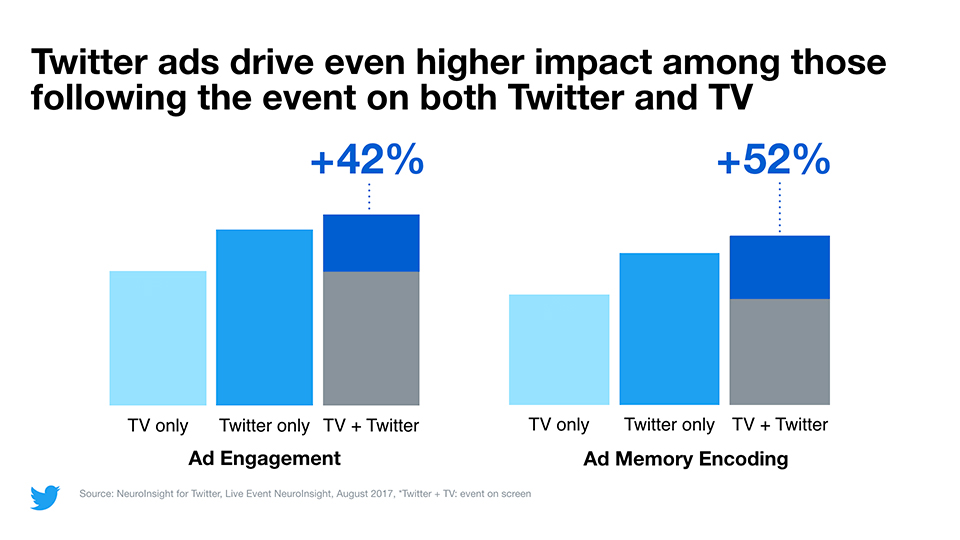 3 TV ads are more effective with a TV + Twitter audience.

In addition, Twitter doesn’t detract from the effectiveness of TV ads. This same group of users following sports on both Twitter and TV also shows higher levels of engagement (+18%) and memorability (+13%) of TV ads when compared to the TV-only audience. 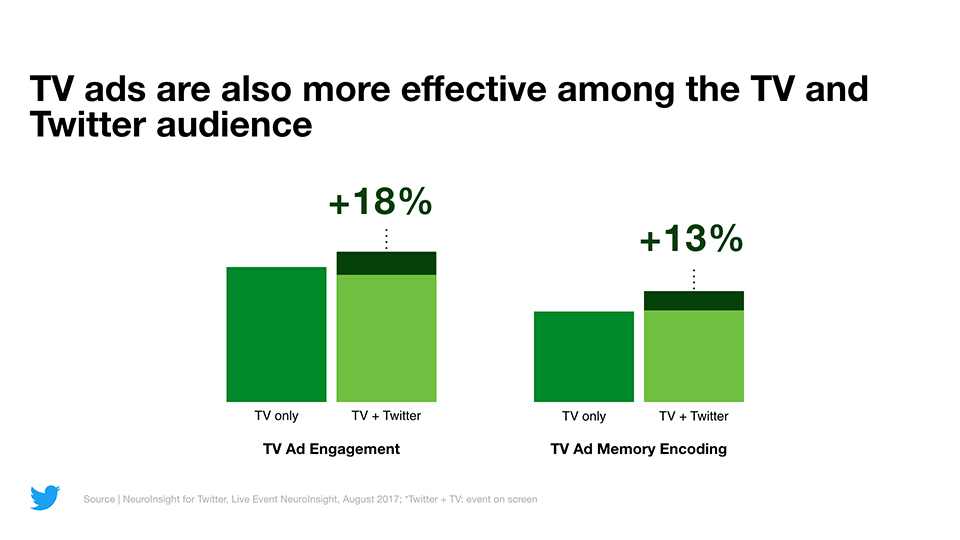 The study’s results “are great news for business,” says Pranav Yadav, CEO of Neuro-Insight US Inc.

Through our past work, we know that generally the presence of the second screen, specifically with Twitter, helps TV, and we saw a similar effect for live events in this study. This means that by having Twitter as a part of the marketing mix, brands can not only reach a bigger audience, they’re actually giving a boost to their original investment in TV. It’s a win-win.”

Twitter has changed the live sports viewing experience for fans as well as brands. These results point to Twitter as a complement to, rather than distraction from, TV – delivering both incremental reach and engagement for marketers.

The comScore report (regarding how users turn to Twitter vs. other social platforms during live events) compares publisher visitation during the hours of a specific event to a control group. The control is an average of the same day and hour range of the event within three weeks during the same general time period. The dates within the control group are selected to exclude days when other live events may have occurred. For example, an analysis on a Sunday in January may have certain dates excluded to take out the impact of events like award ceremonies during that season.

The multimarket Neuro-Insight study used advanced biometrics to learn more about people’s connection to viewing content on TV, engaging with brands on Twitter, and what happens when the two are experienced together. It was the first neuroscience-based study of its scale, size, and geographic impact for Twitter

The Neuro-Insight study took place across six major TV events (sports, award shows, and popular TV shows) in three major markets (US, UK, and Canada). More than 600 people were included in the study (at least 50 people in each cell). All respondents were screened to ensure that the shows were applicable to their interests.

Neuro-Insight’s research focused on measuring two connection metrics: engagement and memory. Engagement, an indication of how involved people were, is generally triggered by material of personal relevance. Memory is the process of encoding and storing signals in order for information received to have a lasting effect on future attitudes and behaviour. 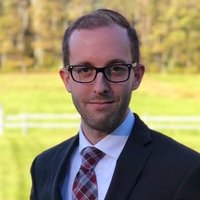