The most effective ways to promote your video campaign

Three video campaign types went head-to-head on and off Twitter. This is what the research showed to be most effective for creating buzz and impact.
Win the battle for an attentive audience.

Stage a takeover, spread a message, and change how people think. No, this isn’t the plot for the latest Hollywood blockbuster, but with online video growth exploding and becoming an increasingly competitive market, you’ll need to have the right strategy to break through the noise.

But not all platforms are equal. So how can you make the most of these opportunities and ensure your video campaigns are effective, based on your goals?

With this question in mind, we partnered with IPG’s ‎@MAGNAGLOBAL part of ‎@ipgmediabrands, to research how three video formats perform against each other on and off Twitter:

Twitter First View is the most effective video takeover.

When it comes to influencing perceptions, First View takes the crown. People just can’t take their eyes off it! Our research showed that the First View video ad was the most effective video execution over the non-Twitter video platform takeover1, with nearly double the aided brand and message recall. People watched these video ads longer on Twitter, too2 (more than half viewed for at least six seconds on Twitter).

Compare this with the other platform’s video takeover, where nearly half had scrolled or clicked away within three seconds.3 When it comes to achieving brand awareness, view times are key, and getting people to focus on your content for over twice as long is priceless. 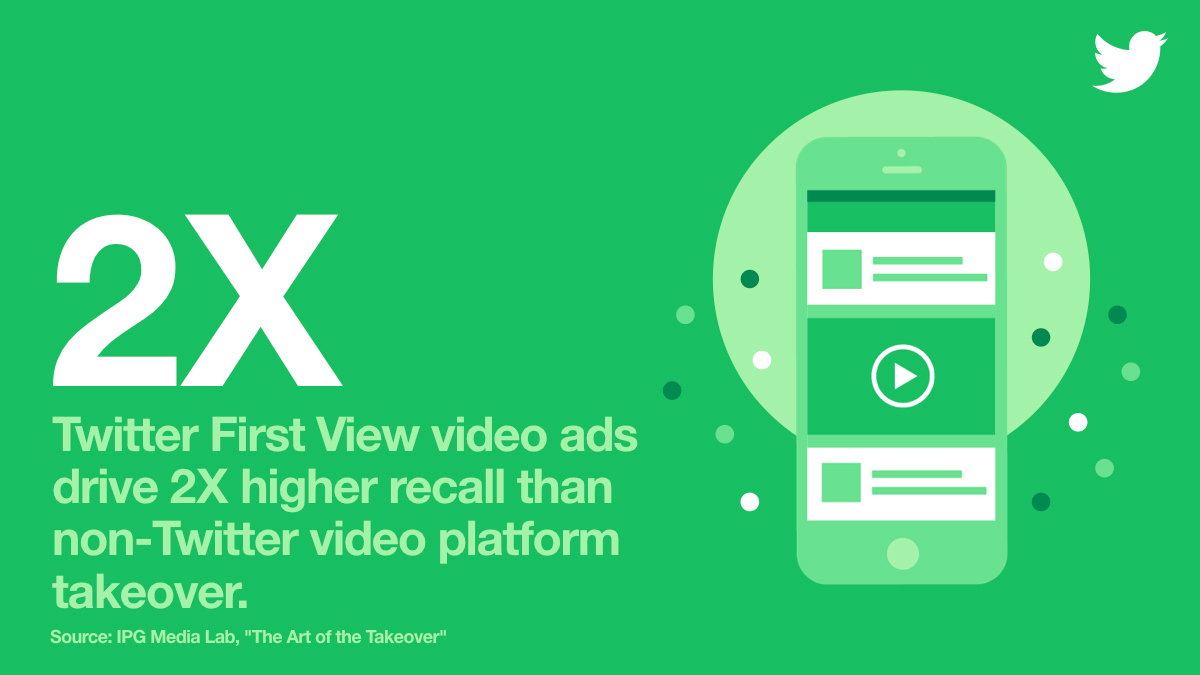 We found that First View video ads of all lengths inspire trust – more than 70% of those surveyed thought that the message in the video ad was trustworthy. But to really win over your audience’s hearts, keep it short. Shorter ads were rated higher; in fact, 79% of respondents agreed that a six-second ad’s message was trustworthy.

Takeaway: Keep it short and sweet to evoke higher levels of trust. Try a six-second video ad to maximise trust levels with consumers. 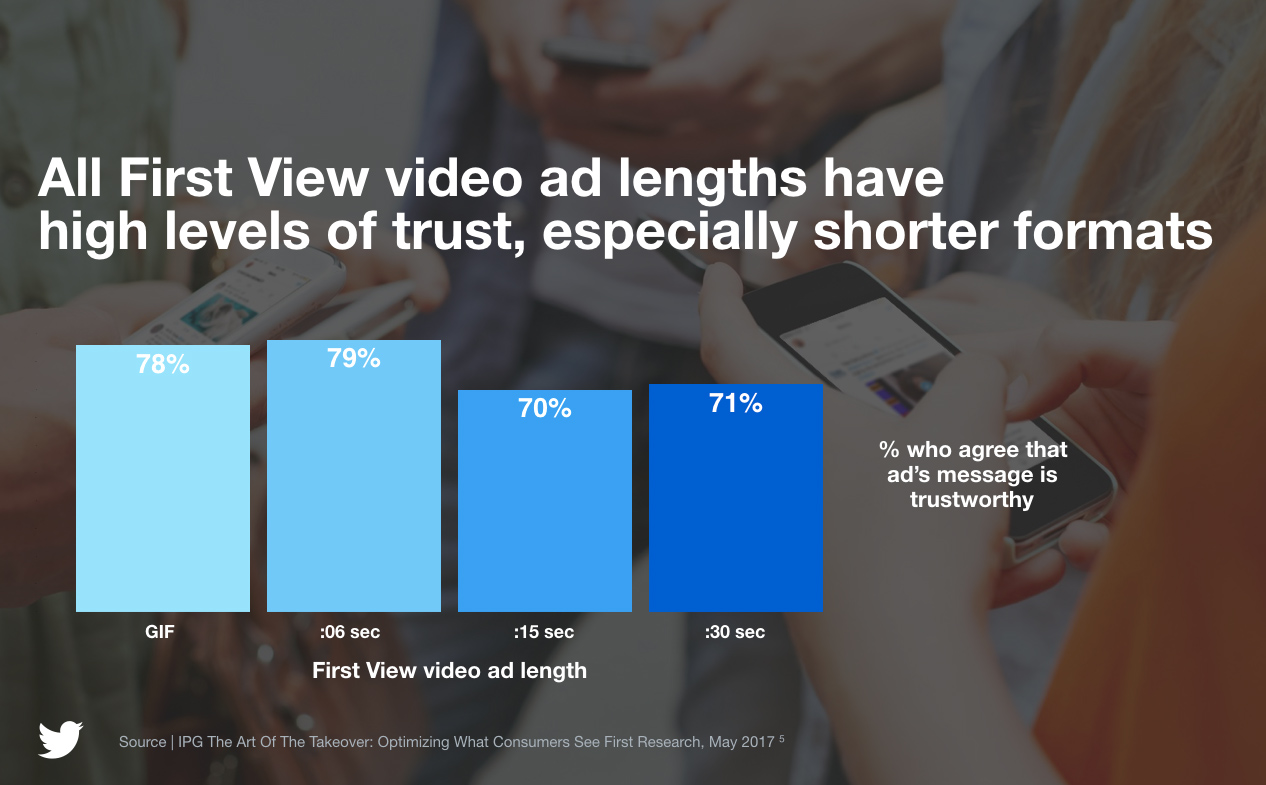 Promoted Video ads, where the video appears lower in the timeline, can be extremely effective, but serve a different purpose from First View. Promoted Video ads had a higher impact – over half of respondents said they would share the ad, while less than half said the same for First View.4 That’s because the lower placement in the timeline felt more natural, so people who saw the ad were significantly more likely to view its message as trustworthy, and share it.

Those surveyed also rated the Promoted Video ad as slightly more relevant, more informative, and less intrusive than First View – which makes Promoted Video ideal for a campaign with multiple touchpoints over a longer period of time.

What this means for your next campaign:

Got a launch or looking to drive a big impact quickly? Try First View.

Want to promote product messaging or brand awareness over the longer term? Check out Promoted Video – its boost in impact provides opportunities to communicate key messages.

The study was carried out in partnership with ‎@MAGNAGLOBAL, part of ‎@ipgmediabrands. It involved 3,732 participants in the US, recruited from an online panel on smartphone and PC platforms. These participants were surveyed for demographic and media consumption habits, then assigned a randomised test cell for in-feed auto play ads on Twitter on mobile phone, video takeover on mobile phone, or video takeover on PC. Passive metrics such as time in view, clicks, or video completion were measured during the experience. Afterwards, a post-exposure survey measured traditional brand metrics (ad recall, perceptions, etc.) and qualitative feedback.

For more information on this research, contact your sales rep or reach out to sales@twitter.com.